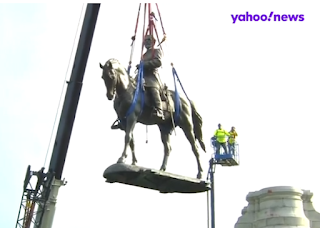 RICHMOND, Va. (AP) — A crowd erupted in cheers and song Wednesday as work crews hoisted an enormous statue of Confederate Gen. Robert E. Lee off the pedestal where it has towered over Virginia’s capital city for more than a century.

One of America’s largest monuments to the Confederacy, the equestrian statue was lowered to the ground just before 9 a.m., after a construction worker who strapped harnesses around Lee and his horse lifted his arms in the air and counted, “Three, two, one!” to jubilant shouts from a crowd of hundreds. A work crew then began cutting it into pieces.

“Any remnant like this that glorifies the Lost Cause of the Civil War, it needs to come down, said Gov. Ralph Northam, who called it "hopefully a new day, a new era in Virginia.” The Democrat said it represents “more than 400 years of history that we should not be proud of.”

Sharon Jennings, an African American woman born and raised in Richmond, said she had mixed feelings seeing it go...MORE

Too bad the journalist was wanting to be theatrical about the workmen cutting the statue into pieces which in truth was cutting the statue at the waist of the rider in order to transport it through town. It is equally sick to write false news as it is to take down history to suit just a few folks. Might as well start burning books?