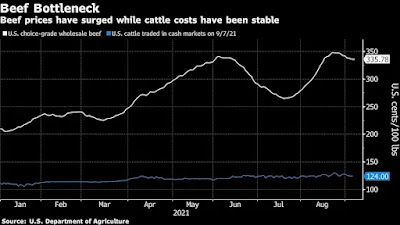 The Biden administration is taking aim at major meatpackers, charging that “pandemic profiteering” is squeezing consumers and farmers alike, with a few companies that dominate the industry raking in record profits.

White House National Economic Council Director Brian Deese said Wednesday that increases in the prices of beef, pork and poultry are responsible for half the jump in food prices since late 2020, yet farmers have seen little gain in what they are paid by giant meat companies.

“It raises a concern about pandemic profiteering, about companies that are driving price increases in a way that hurts consumers who are going to the grocery store,” Deese said. What’s happened “isn’t benefiting the actual producers, the farmers and the ranchers that are growing the product.”

...The White House blamed corporate consolidation in recent decades for the price increases. Four companies control 82% of U.S. beef capacity while the pork and poultry sectors have similar levels of concentration, according to U.S. Agriculture Department data.

“Absent this corporate consolidation, prices would be lower for consumers and fairer for farmers and ranchers,” Deese and two other economic advisers said in the blog post...MORE