What Trump proposed cutting in his 2019 budget

On Feb. 12, the Trump administration released its 2019 budget proposal for changes to make to the federal government’s spending. Many of the cuts in the plan are unlikely to become reality: Congress just increased spending limits last week, and it rarely dares to change entitlement programs. But the budget is an important signal of the administration’s priorities. After many years promoted as Republican orthodoxy, eliminating the federal budget deficit is not an element of this budget. To pay for additional defense spending, the border wall and an infrastructure plan, funding would be cut from many executive departments and agencies, including big cuts at the Environmental Protection Agency and the State Department. 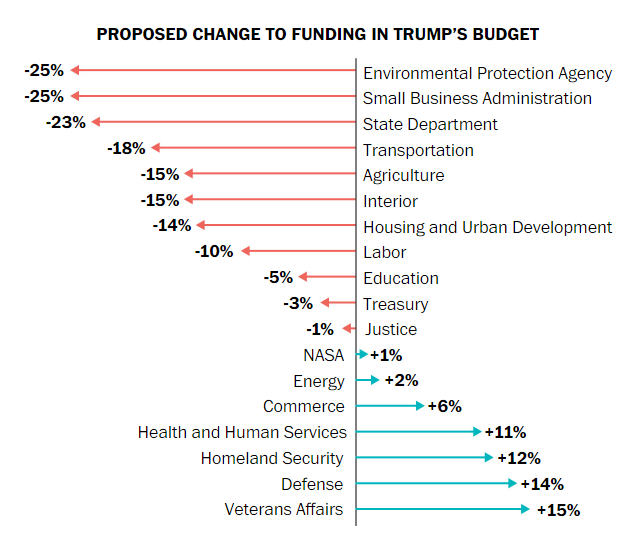 The Trump administration is seeking to cut the Department of Agriculture’s discretionary budget by $3.5 billion, or 15 percent, while also slashing by $17 billion the funds available to the Supplemental Nutrition Assistance Program (food stamps). The budget would also reduce federal crop insurance subsidies and cut spending for conservation programs and foreign food aid. Trump’s budget hits poor Americans the hardest
Key proposed changes
Reduces funding for the Supplemental Nutrition Assistance Program by $17.2 billion in 2019 and $213.5 billion over the next 10 years.
Limits eligibility in the crop insurance program and caps premium subsidies.
Cuts the $136 million in funding for conservation programs.
Eliminates the Rural Economic Development Loan and Grant Program.
Discontinues the $166 million Food for Progress aid program.

With the public parks and lands system struggling with $12 billion in deferred maintenance – half of which applies to deteriorating roads – the administration’s budget proposes a new “Public Lands Infrastructure Fund” that would total $152 million in fiscal 2019 and grow significantly in subsequent years. By fiscal 2023, it would be $764 million. Overall the department would receive $2 billion less than it did in 2017. Public land development to pay for parks upkeep
Key proposed changes
Slashes $33 million, or 92 percent, of the Land and Water Conservation Fund, which supports land acquisition and restoration efforts using federal revenue from oil and gas drilling off the Outer Continental Shelf.
Takes 50 percent of energy leasing receipts that exceed fiscal 2018 budget projections and are not allocated for other programs and divert those to the infrastructure projects. With Interior trying to expand energy development on federal lands and waters, the document notes, “this initiative has the potential to generate up to $18 billion over 10 years for parks and other public lands infrastructure.”

Under the proposed plan, several dozen EPA programs would be eliminated altogether. But a few programs would be expanded, and the White House is no longer seeking to eliminate the Energy Star program (though it would be funded entirely through fees.) Trump budget seeks EPA cut, would eliminate dozens of programs
Key proposed changes
Eliminate funding for state radon-detection programs, assistance to fund water system improvements along the U.S.-Mexico border and partnerships to monitor and restore water quality in the Gulf of Mexico, Puget Sound and other large water bodies.
Add $397 million in funding to bolster investment in wastewater and stormwater infrastructure.
The Superfund cleanup program, a priority of EPA Administrator Scott Pruitt, would no longer be slashed.
READ ENTIRE ARTICLE

Email ThisBlogThis!Share to TwitterShare to FacebookShare to Pinterest
Labels: budget

You will probably find as many opinions as there are navels regarding this article. As they say..."The devil is in the details." There is a lot of waste and abuse in government agency spending. Reducing some of the spending is necessary if we ever hope to reverse our ever growing national debt. I would favor an independent audit of ALL government agencies. Secretary of State Hilary Clinton had over $200 million disappear without any accountability. It was reported last week that the Pentagon cannot account for over $800 million. Cutting spending will be an overall good thing even though we will hear a lot of whining along the way. Respectfully, Larry Christesson