Who owns water? NM and US landowners putting barbed wire across rivers 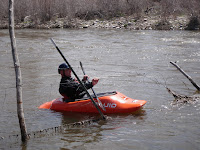 New Mexico is a battleground in the fight over once public waterways, sparking fears it could set a national precedent

As Scott Carpenter and a few friends paddled down the Pecos river in New Mexico last May, taking advantage of spring run-off, the lead boater yelled out and made a swirling hand motion over his head in the universal signal to pull over to shore. The paddlers eddied out in time to avoid running straight through three strings of barbed wire obstructing the river. Swinging in the wind, the sign hanging from the fence read “PRIVATE PROPERTY: No Trespassing”. One member of their party waded into the swift water to lift the wire with a paddle for the others to float under. As they continued downstream, Carpenter, a recreational boater from Albuquerque, looked over his shoulder a see a figure standing outside the big ranch house up the hill. He offered a wave, but received nothing in return. It’s a scene playing out with increasing frequency in New Mexico, where a recent bid to legally privatize streams has public users like Carpenter more than a little alarmed, not least for the precedent it might set beyond the borders of this western state. While the fight over US public lands has reached a fever pitch unlike anything seen in recent decades, and the Trump interior department seeks to lease out vast areas to private interests for mining and drilling, the fate of public waterways has largely flown under the radar.

Now New Mexico has become a battleground for that very issue, with the state government, landowners, and outfitters on one side of the fight and anglers, boaters, recreationalists and heritage users on the other. At the heart of the argument: who owns the water that has long been considered the lifeblood of the arid west. But in the last hours of 2015, efforts to bar public access received official sanction, when New Mexico’s state government quickly and quietly passed a bill that implies private ownership of public waters that run through private land. It was a response to a statement from New Mexico’s then attorney general, Gary King, that the public can wade and fish in streams running through private property, as long as they remain in the stream, which is in line with common doctrine in many states. Landowners and outfitters protested. The rule remained mostly dormant until late December, when in a special meeting with only 10 days’ notice – just a third of the 30-day standard – the state began a process to allow landowners to certify streambeds as private property... more
Posted by Frank DuBois at 9:12 AM

My opinion is that if the King's had fishing streams on their many properties the law would be different. Many land owners maintain stream interfaces which are more conducive to fish habitat and there are always more fish in these places. So along comes the fisherman with a license from the state and trespasses on your land, for the price of the license, and takes many of the fish on your property. If the state is so interested in allowing fisherman to trespass then it should compensate the landowner for trespass. There is no other interest to the state, in allowing this trespass, except to promote fishing licenses for a few. The argument that the state owns the wildlife does not give the state the right to grant trespass.

In a few other states (?Wy,CO,Ut?)you can float down a river (like a ROW) but you cannot touch bottom, not wade, not put in or go ashore.
I don't know about fishing but common sense would dictate don't fish through private lands