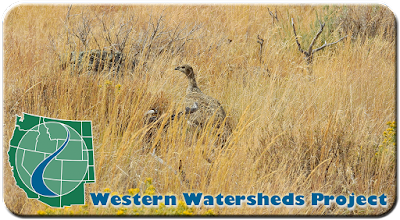 Western Watersheds Project, WildEarth Guardians, and Center for Biological Diversity filed a lawsuit today to block livestock turnout in Oregon sage-grouse habitat. The turnout would occur under a grazing permit that was renewed illegally after Secretary Ryan Zinke intervened in the appeals process. The Bureau of Land Management (BLM) had originally declined to renew the permit in 2014 because of the permittee’s record of arsons and other noncompliance with the permit terms and conditions. The livestock will spread cheatgrass, degrade recovering sage-grouse habitats, and increase thSome background on the Hammond case Some background on the Hammond case e flammability of these public lands. The grazing permittees in this case are Dwight and Steven Hammond, notoriously bad actors from Burns, Oregon. The Hammonds were sentenced to federal prison for committing arsons to increase forage for their cattle on the public lands and their sentence served as the excuse for anti-public lands extremists to stage an armed takeover of the Malheur National Wildlife Refuge in January 2016. They received a pardon from President Donald Trump after serving parts of their sentences. WWP supported the BLM's decision to cancel the permit, and we still do. The BLM itself had stood by its revocation of grazing privileges, and had been defending its decision until former Secretary of the Interior Ryan Zinke ordered it to back down on his last day in office on January 2, 2019, during the government shutdown. Zinke demanded that the BLM renew the Hammonds permit within 30 days, precluding environmental review and consideration of the impacts of resuming grazing on lands that had been recovering from livestock impacts for the past five years...MORE

As if this family hasn't been through enough.
See my post Some background on the Hammond case for the sordid history of this affair.
Posted by Frank DuBois at 11:54 PM