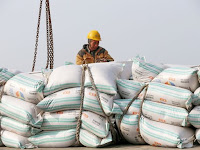 ...But when it comes to trade, are we better off now than a year ago? Two points come to mind. First, the trade war has done nothing to reduce the trade imbalance with China. The imbalance between our export in goods to China versus our imports created a trade deficit of more than $375 billion in 2017. Even after the tariff war escalated last year, the trade deficit with China still increased to nearly $420 billion in 2018, a 12% increase in one year. Second, agriculture and farm families in the bread basket states have borne the brunt of the trade war. Last summer, after the Trump administration announced its tariffs on Chinese goods, China lowered its commitment to buy 366,000 metric tons of U.S. soybeans for the 2018 crop year. Then, in an unusual move, China announced a year in advance that they would lower their commitment for the 2019 soybean crop by an additional 66,000 metric tons — totaling 432,000 metric tons. It comes as no surprise, then, that the value of soybeans exported to China from America dropped from $14 billion in 2016 to more than $12 billion in 2017. Even more disconcerting and astonishing, the value of soybean exports dropped almost 75% in 2018 to only $3.1 billion.  In terms of a hit to individual farmers, the price of a bushel of soybeans has dropped more than 20% from a peak of about $10.50 per bushel in the summer before the tariffs were proposed last year, to a low of $8. Farmers are also major consumers of inputs into their production process. While the prices of their soybeans dropped over 20% over the past year, the cost of fertilizer to grow those crops is up, as is the price of the steel used to manufacture their farm equipment. Put it all together, and the picture for farmers is bleak. Even with a one-time $12 billion government dole to farmers, prompted back in the summer of 2018 by the administration’s political concerns over the tariffs’ impact in the heartland, net farm income dropped from $75 billion in 2017 to $63 billion in 2018. That's a far fall from a net farm income of $123 billion in 2013...MORE
Posted by Frank DuBois at 9:17 AM

Email ThisBlogThis!Share to TwitterShare to FacebookShare to Pinterest
Labels: trade