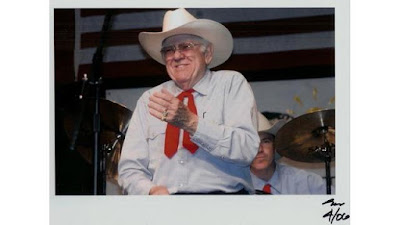 Just about a month before the annual Legends of Western Swing Festival opens in Wichita Falls, a bona fide legend of western swing himself has passed away at age 91. According to the Bob Wills Day Facebook page, Leon Rausch, the voice of The Texas Playboys, died Tuesday morning in Fort Worth. Rausch was known as the voice of the legendary band for over 60 years. After band founder Bob Wills died in 1975, Rausch and the original Playboys continued to tour and play the band’s classics. He performed with The Playboys II and Rausch and fellow band member Tommy Allsup played many times at the Legends of Western Swing Festival. Rausch performed for the Playboys final concert to a sold-out crowd in Fort Worth in 1986, but he returned almost every year after that to sing at the annual Bob Wills Day in Turkey, Texas. He is survived by his wife of 69 years, Vonda.  KFDX/KJTL

Known as "the voice" of Bob Wills & His Texas Playboys, Leon Rausch was born October 2, 1927, in Missouri. Edgar Leon Rausch was raised in a musical family and began playing guitar with his father at local dances as a child and continued through his high-school years. Upon graduation, Rausch joined the military and played off and on with local bands until he moved to Tulsa in 1955. Rausch received his first big break with an appearance on the Louisiana Hayride the following year, and on St. Patrick's Day 1958 he was asked to join Bob Wills & His Texas Playboys, replacing vocalist Glynn Duncan. Rausch's stint with Wills lasted into the early '60s. He then briefly joined Johnnie Lee Wills' band before forming his own group, the New Texas Playboys, in Fort Worth, TX. By the late '60s the band had appeared on Cowtown Jamboree and released a few singles without much fanfare. In 1973, an ailing Wills contacted Rausch about rejoining his Texas Playboys on what would be Wills' final record, For the Last Time. Following Wills' death in 1975, Rausch and the original Texas Playboys continued to record and play gigs, including a high-profile appearence on Austin City Limits. In 1983 Rausch had slowed down his working pace but continued to take part in projects that interested him, including Asleep at the Wheel's Tribute to the Music of Bob Wills with the group that became the Playboys II. Since then, Rausch has written a book co-authored by Dr. John E. Perkins Jr. titled Leon Rausch...The Voice of the Texas Playboys about his time with Wills.
Posted by Frank DuBois at 2:59 PM

Email ThisBlogThis!Share to TwitterShare to FacebookShare to Pinterest
Labels: music