Environmentalist Killjoys Are Coming for Your Football 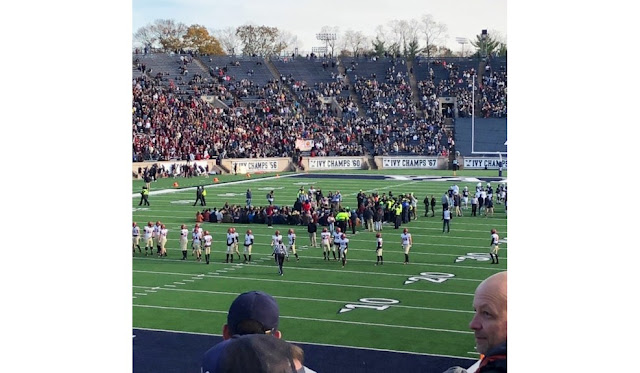 It’s apparently not just airplanes and cows that are killing the planet.
Harvard–Yale climate-change protests last weekend help explain why Americans aren’t buying global-warming extremism or the tantrums of angry youngsters.
Are environmental activists changing the hearts and minds of Americans about global warming, inspiring them to treat it as a pressing crisis? So far, the results are mixed, as we saw last Saturday when climate protesters stormed the field to disrupt the annual Harvard–Yale football game. The stunt earned more boos than cheers from the crowd at the Yale Bowl in New Haven.
Polls have shown that more Americans than ever before are aware of climate change as an issue, but they are mixed about whether it is a “crisis” or just a “problem” that won’t require major sacrifices to fix, as a recent Washington Post/Kaiser Family Foundation poll found.
That survey showed that Americans were split down the middle on how to define climate change, with 38 percent saying it is a crisis and an equal number calling it merely a problem. But the results were far more one-sided when it came to the question of what to do about climate change, with 62 percent of the public saying that any solution will require only “minor sacrifices” or “not much sacrifice.” Only 37 percent believe it will require “major sacrifices.”
The public’s disinclination to see climate change as a pressing global catastrophe is fueling the rage of activists. Swedish teenager Greta Thunberg, who has become an international celebrity for her angry warnings that we’re on the brink of “mass extinction,” is widely applauded by the media, but there’s little indication that Americans are ready to heed her advice. Indeed, some environmental activists think her emphasis on pushing people to change their personal behavior — to give up meat, cheese, plastic, and air travel — is bound to undermine their cause. They have little hope that people living in the 21st century will be content to live as if they were in the 19th because Thunberg and other activists tells them it will save the planet. These advocates want the sole focus to be on governments, not individuals.
...At the heart of the divide on climate change is a question of hypocrisy and class. Elites such as the students who attend the country’s most exclusive universities don’t merely believe the claims that the planet is burning up. They go further and support the kind of radical countermeasures put forward in the Democrats’ “Green New Deal,” changes that would utterly transform — and devastate — the American economy and society.
Celebrities including Britain’s Prince Harry, actor Leonardo DiCaprio, and former president Barack Obama all attended the so-called Google Camp event on the environment at a Sicilian resort this past July, flying there in 114 private jets that pumped an estimated 784,000 kilograms of carbon into the atmosphere. Similarly, student activists at Harvard and Yale show no sign of giving up their privileges and living by the rules they’d like to impose on the rest of the country. To be fair, Thunberg eschews air travel and scolds her parents for trying to get away with late-night cheese snacks. (On the other hand, Thunberg’s much-ballyhooed transatlantic crossing by sailboat, to deliver her to the U.N. for her climate-change speech, actually had a larger carbon footprint than one round-trip Europe–New York flight, given that two crew members had to fly across the Atlantic to NYC to man the boat on its return, and two of the original crew flew home from NYC to Europe.)
Such hypocrisy was on display at last weekend’s football-game protest as well. The antique ritual of the Harvard–Yale game has long been a favorite of the non-Yale residents of New Haven. They attended the Yale Bowl in large numbers this year; the fact that they lustily jeered the students trying to spoil their fun is telling.
...The Harvard–Yale protest was very much in line with the Thunberg-style politics of angry and intolerant children. Such demonstrators pay little heed to democratic processes or any counterarguments to their climate catechism. But are privileged students going to persuade Americans to make “major sacrifices” for the sake of the climate by spoiling their Saturday-afternoon football? Will Americans follow the advice of celebrity scolds who threaten to take away their freedom of movement and their access to a non-vegan diet? The climate-change alarmists seem to think so, but they are tone-deaf to American public opinion and sensibilities.