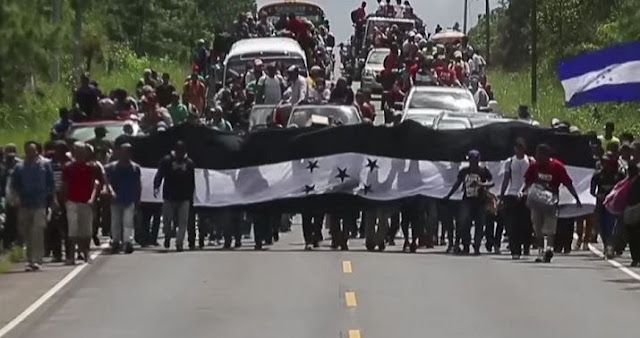 A new caravan formed in Honduras with about 2,500 migrants traveling toward the U.S.- Mexico border. Saturday the Mexican National Guard stepped up and honored the “safe third country” agreement. The migrants were denied entry into Mexico at the Guatemala-Mexico border. Last November the Trump administration entered into a series of regional agreements with countries including Mexico, Guatemala, and El Salvador. The goal is to reduce the burden of Central American migrant caravans arriving at the U.S. border. Migrants are being returned to Guatemala, sent back to their home country, or allowed to enter the Migrant Protection Protocols (MPP) and wait in Mexico. In this case, Mexico stopped the caravan at a point of entry as they crossed a bridge over the Suchiate River between Mexico and Guatemala. The scene was tense but Mexican National Guardsmen kept the migrant caravan back. There was some orderly entry allowed in small groups.


Honduran migrants waved their country’s flag and sang the national anthem as they approached the bridge. At the height of the confrontation, Guatemalan authorities estimated 2,500 migrants were on the bridge, or attempting to get on it.
Mexican National Guardsmen slammed down a metal fence that reads “Welcome to Mexico” to block the path of the migrants.
Babies cried and tempers flared as the crowd swelled. Amid shoves, Mexican officials did allow a few migrants to enter the country in groups of 20, while a voice over a loudspeaker warned migrants against trying to slip into Mexico without passing through immigration filters.

READ ENTIRE POST
Posted by Frank DuBois at 11:09 AM