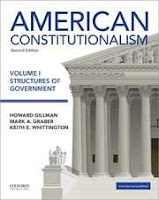 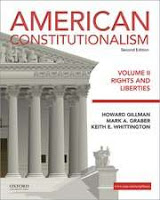 As many students and instructors are experiencing disruption to their classes and an unexpected shift to an online learning environment, let me highlight a potentially helpful resource.
Oxford University Press has maintained a freely accessible companion website to the American Constitutionalism casebook that I wrote with Howard Gillman and Mark Graber. The casebook takes a political and historical approach to the study of the American constitutional system, and so the bound volume works through American constitutional development from the colonial period to the present and incorporates not only cases decided by the U.S. Supreme Court but also lots of material from other participants in debates over the content of our constitutional rules, including lower federal courts, state courts, legislative debates, executive branch documents, and civil discourse from social movement leaders, politicians, and scholars. So our examination of American constitutionalism includes the likes of James Madison, Frederick Douglass, Thomas Cooley, and John Yoo, as well John Marshall, William Brennan, and Antonin Scalia.
In any case, in addition to selling the books (which you should buy!), OUP has allowed us to maintain a free companion website with hundreds of supplemental documents that could not fit into the bound volumes. These readings are edited and have brief introductions just like the materials in the book. There is an index to the materials that provides a guide to what is available. The companion website can be found here.
On the website, you can find classic cases like Baker v. Carr and Chaplinsky v. New Hampshire and Hustler Magazine v. Falwell. But you can also find such less familiar fare as the Senate debate on the constitutionality of the Louisiana Purchase, the Pennsylvania supreme court's opinion on the constitutionality of the Civil War military draft,  Attorney General William French Smith's letter on the duty to defend the constitutionality of federal statutes in court, and the 9th circuit's opinion on whether tattoo parlors are protected by the First Amendment.
I also have a companion website hosted by Oxford University Press for my reader in American Political Thought (which you should also buy!). Like the American Constitutionalism site, this companion site is free and includes dozens of readings in the history of American political and constitutional thought that could not fit into the bound volume. Like the materials in the book, they are all edited and have a brief introduction. There is an index to those materials as well. There you can find such gems as Benjamin Franklin's essay on the laboring poor, Thomas Paine's essay on African slavery, Frederick Douglass's defense of free speech, and William Graham Sumner's case for free trade. The companion website in American Political Thought can be found here.