McConnell was the Grim Reaper to Pelosi’s Wuhan Pork Bill 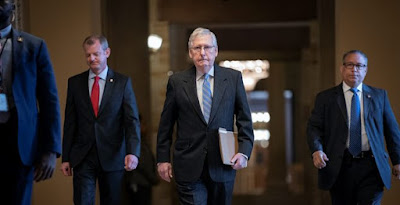 It’s over. The game is over. And President Trump, the Republican Party, the country, and Senate Majority Leader Mitch McConnell have won. Democrats have caved over their antics that blocked a Wuhan Coronavirus relief package aimed at helping American businesses and workers. The $2 trillion package was primed and ready to go on Sunday, with the Senate working throughout the week to get it done. Then, Speaker Nancy Pelosi flew back into D.C.—because the House took the week off—and announced that they will be putting forward their own package, effectively signaling that political theater over this would erupt. It’s what the Democrats wanted. They can’t let anything be viewed as a win for the Trump White House. It’s an election year. And they wanted to tank the markets even further. Well, they got that on Monday. It was shoddy from the get-go. Like their shutdown over illegal aliens in the early days of the Trump presidency, the Democrats didn’t have much to stand on here: they were flipping off American workers. Oh, and they co-wrote the Senate bill. Yeah, that was one thing that was explicitly clear, which made this move even more nakedly political. And the Pelosi pork proposal was fraught with nonsense, like $35 million for the Kennedy Center, $600 million for the IRS, diversity on corporate boards, and voting rights provisions—all of which does nothing to help American workers during this economic shutdown over the Wuhan virus. Well, they call McConnell the grim reaper for nothing. We have a deal, and it’s pretty much what was going to be voted on from the start of this mini fiasco...MORE
Posted by Frank DuBois at 7:04 PM

Clicked on the "MORE" and there was no more :( So why was McConnell called the "Grim Reaper" from what I heard the Pork being pushed by the CommieCrats passed :( the only thing I saw at the "MORE" were tweets some which were made on the 23rd thus worthless info IMHO very disappointed in this Post :( Boo Hiss #TRUMP2020 #WWG1WGA #AmericansFirst not looking forward to the upcoming election knowing the Commies will be pulling all kinds of tricks in an attempt to steal yet another election :(

Sorry you were disappointed in the post. Personally I've been disappointed in the whole process. There were six additional paragraphs in the post linked to, in addition to the tweets. Your understanding is different from mine in that I believe the Pelosi stuff on the Kennedy Center, same day voting, collective bargaining, etc., is not in the package passed by the Senate (it can be viewed here: https://www.npr.org/2020/03/25/820759545/read-2-trillion-coronavirus-relief-bill). I agree the Grim Reaper handle hardly fits McConnell. He let an $850 million proposal balloon to $2.2 trillion. It was Trump's man,
Mnuchin,however, who negotiated the final deal.