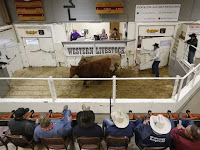 ...This recent flurry of official concern and seemingly contradictory action is merely the latest chapter of a decades long saga of price volatility and increasing corporate control of meat production within the U.S. Concentration within the meatpacking industry has been a significant concern for more than 30 years. According to USDA statistics, the number of cow/calf operations in the U.S. has plummeted from 1.6 million in 1980 to less than 950,000 today. Fewer than 2,000 commercial feedlots now finish 87% of the cattle grown in the U.S. Some can now hold more than 200,000 animals at a time. According to the U.S. Census Bureau in 1977 the nation's four largest meatpackers processed just 25% of the cattle grown in the United States, and 84% of all steer and heifer slaughter occurred in plants that slaughtered less than half a million animals a year. By 1997, plants in that category saw their share drop to 20%, while 63% of slaughter occurred in plants that slaughtered more than a million steers and heifers. Today the meatpacking industry is concentrated into four multinational corporations - JBS of Brazil; Arkansas-based Tyson Foods; Cargill Meat Solutions of Wichita; and National Beef Packing of Kansas City, Mo. Together these four currently hold more than 80% of the market. Despite this new reality of market concentration, the formula through which prices are set for the purchase of livestock has remained embedded in the market realities of half a century ago. "For nearly a century, meatpackers and producers would haul animals to stockyards and auction barns to physically buy and sell thousands of cattle almost daily for cash," explains a Wall Street Journal report. "But over time they found it inefficient and expensive to travel miles with cattle in tow to barter over pennies and nickels per pound, so many buyers and sellers gave up negotiating each day." What evolved was a system in which cattle sellers and buyers would agree upon the future delivery of cattle based on an agreed price. Since the 1970s that price has been negotiated based upon the value of cattle sold at the Chicago Mercantile Exchange (CME) cash market. Futures trading was developed as a way for buyers and sellers to reduce the uncertainty of sales over time. The parties initially agree to buy and sell individual futures contracts (an obligation to buy or sell 40,000 pounds, or around 35 head of cattle) for a price agreed upon today (the forward price) with delivery and payment occurring at a future date (the delivery date.) The development of futures trading added greater certainty to market transactions, allowing sellers and buyers to hedge their bets against fluctuating cattle prices, and to better plan for the future knowing their contracted income. That worked well when cash sales made up a majority of cattle exchanges in the U.S. But in the past decade cash negotiation on the CME have dropped from a 50-percent plus majority of sales to less than 25%. Most of the cattle delivered to slaughter plants today are sold via formula trading, which incorporates the cash market value as a base (calculated on CME reports), plus or minus premiums and discounts.
Posted by Frank DuBois at 6:40 AM