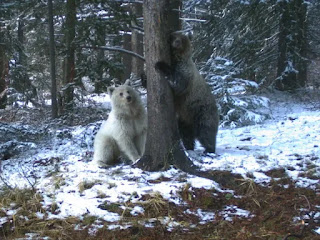 Cara Clarkson and her family were driving down a remote highway in Canada’s Rocky Mountains, when a figure glimpsed against the dark evergreen forest left them in disbelief. Nuzzling though the snow for food was a white grizzly bear. The family briefly pulled over to watch the bear and its sibling, which had darker fur. “We were like, ‘holy smokes!’ We knew we were so lucky because white grizzly bears are unheard of,” said Clarkson told local media. Grizzly bears normally range in colouration from dark brown to blond, but a white bear is incredibly rare. Experts say the colouring is the result of a recessive gene in the cub – not albinism. Nor is the young bear a member of another Canadian subspecies, the Kermode “spirit” bear, which is found in the temperate rainforests of the country’s west coast. Those elusive animals also have white fur, but are a subspecies of the black bear – not the grizzly. “It’s definitely a pretty unique animal,” said Seth Cherry, a wildlife ecologist with Parks Canada. “I’ve never seen a white bear personally.” Local wildlife officials have known about the white grizzly since 2017, but Clarkson’s mobile phone video of the bear, which went viral, marks the first time the public has caught a glimpse of the ghostly predator...MORE
Posted by Frank DuBois at 12:48 PM