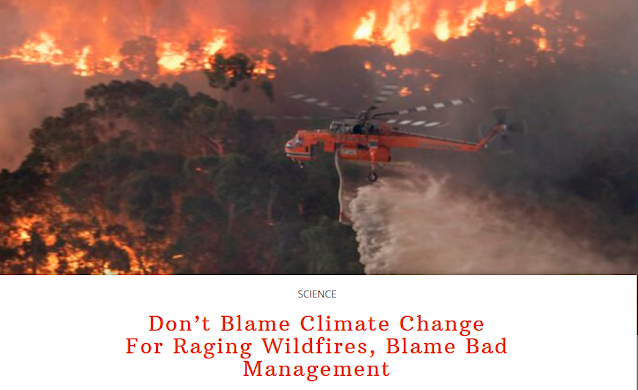 California and Australia share a common enemy: overzealous environmental regulation. In both places, the unintended consequences of a radical environmentalist agenda has been massive wildfires.

California suffered from two horrible fire seasons in the last three years, one of which burned down an entire town. Australia has been battling fires for months. More than 135 fires are still burning currently. So far, the fires have scorched 12 million acres, killed 25 people, caused 240,000 Australians to evacuate their homes, burned alive an estimated half a billion animals, and caused $3.4 billion worth of damage.

The big question isn’t necessarily how these wildfires started. In both cases, most of the fires were likely man-made, whether through downed electrical lines in California or arsonists in Australia. The real question, however, is what factors have contributed to making these fires into “mega catastrophes,” or fires that cause over a billion dollars of damage?

As researcher Charles E. Kay argued in a paper on the topic, not only were low-intensity fires a norm in Western forests prior to European settlements, but it has now been discovered that native people purposely set those fires.

The same thing has been discovered in Australia. In his book “The Biggest Estate on Earth: How the Aborigines Made Australia,” historian Bill Gammage wrote that the Aborigines’ strategy of land management “was active, not passive.” Of their management style, Gammage wrote, “The chief ally was fire.” He argues their burning method was not random or haphazard, but planned and predictable. Fires needed to be spaced appropriately and planned with particular terrain and climate in mind.

I read the article and the author has explained the problems fairly well. We can all come up with some illustrations of the opening paragraph:
"California and Australia share a common enemy: overzealous environmental regulation. In both places, the unintended consequences of a radical environmentalist agenda has been massive wildfires."

Logging and forest management along with grazing and rangeland management all became bogged down by bureaucrats whose jobs are based on enforcement of environmental laws. The one law that has caused more trouble than any others is the Endangered Species Act. Forests that are burning today have not been logged because of restrictions that promised to make life good for the spotted owl and several fish. I live in Nevada and the same environmental promises were made in the name of such species as Lahontan cutthroat trout, sage hens, as well as Sierra Nevada Bighorn Sheep in California. As the author explains, federal prohibition of logging and grazing builds up fuels and the result is catastrophic wildfires.

The author touches on the fact that tens of millions of wild animals including birds and aquatic species are killed when the fires occur. After the fires the ash and eroding soils wash into the streams and complete the extermination of aquatic species.

Our federal effort at land management is based on the politics of appeasement of environmental interests. That can only bring us the devastating loss of the very wildlife and wildlife habitat that the government experts claimed they were protecting when they destroyed the logging and ranching industries. Maybe what we need is immediate prosecution of government officials for illegal "take" of ESA protected species based on the failure to properly manage the species and habitats.

Not much proof that "tens of millions of wild animals including birds and fishes are killed by wildland fires. Yes, there are deaths of all species, but if you have spent any time at all fighting wildland fires I challenge you to show documented proof. This comment is not intended to glorify firs and its effects but to point out the fact the false news is not restricted to politics.