I’m from a long line of California ranchers. Now we flee fires all the time. 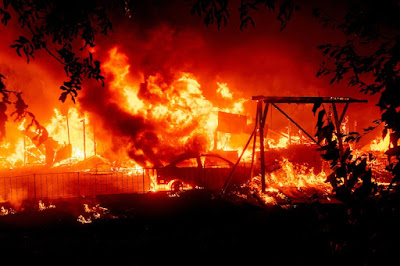 California has five seasons: fall, winter, spring, summer and fire. For the six generations that my family has been commercial cattle ranching in this state, this has been our normal. The threat of fire is part of our landscape. Only recently has the season been this long, this deadly, this life-altering. I say this as a survivor of three major fires over four years: the Cherokee in 2017, the Camp in 2018, and now the Bear, which is part of the North Complex West Zone fires. The last two were called “unprecedented” at the time. These fires have not only altered the landscape of our community, they have stolen our sense of safety in our own homes.

My family has been in this area of California since the 1850s. We have always been aware of the fire danger in this area, and have grazed our cattle accordingly. Our cattle spend the winter in the Sacramento Valley, enjoying the rains and lush native grasses. By May, our cattle move to their summer pastures high in the Sierra Nevada, typically safe from fire. By letting our cattle graze the grassland in the foothills of the valley, we reduce the fire load for the fire season. This method mimics the patterns of native grazers in the area, who had adapted to fire season long before our family even thought about colonizing here.

Over the past five years, things have shifted noticeably. Our summer grazing season is longer and hotter. Fire has shifted from a background threat to a constant fear, from an “if” to a “when.” It seems like no matter how much our animals graze, no matter how much defensible space our communities create, these fires continue to grow extreme in both size and behavior. They act like nothing we have seen before. The disasters deal significant financial losses — the Camp Fire cost an estimated $16.5 billion. The emotional scars are harder to measure.

The first time I was forced to evacuate from a wind-driven fire, it was a primal experience. I had mere minutes in the dark, cinder-filled night to wake my family and grab possessions and documents that are essential to modern life. As a livestock owner I had to make split-second decisions about which terrified animals I thought I might be able to save, by loading into my stock trailer and taking them with me. Leaving behind animals I have dedicated my life to raising is a feeling from which I will never recover.

I was better prepared for the second evacuation and had more time, but the trauma from surviving a fire — a whisper over a year earlier — never left me. I knew what to expect: the damage, the profound loss. And yet reliving the nightmare again stirred up such strong emotions, that after I evacuated all I could do was cry and vomit.

The damage from the Cherokee fire totaled just under $4 million to our family ranch; we have yet to recover from it. The Camp Fire leveled communities and incinerated the infrastructure of the Miocene Canal, also a part of our ranch. This 25-mile-long canal served not only as a water source for farmers, ranchers and fire suppression — it served as an essential fire break. Without it, smaller fires have already burned ranches along its banks, exacerbating an already highly dangerous situation.

Even though arson has played a major role in the fires on the West Coast, the FBI in Portland has debunked the theory that Antifa is setting them.

Part of the problem Ms Brown is... no solutions, just accusations... no real discussion of causes but that the US got out of the Paris accord... Belly up with real discussion rather than mud young lady.