Brazil meatpacker fined for bribes that fueled US expansion 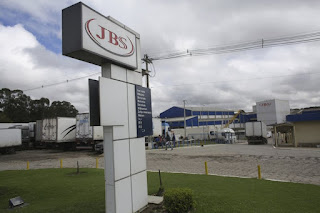 The owner of the world’s largest meatpacker pleaded guilty in U.S. federal court on Wednesday to paying nearly $180 million in bribes to top Brazilian officials in exchange for state-backed financing used to go on a buying spree in the U.S. Sao Paulo-based J&F Investimentos, the controlling shareholder of JBS SA, pleaded guilty in federal court in Brooklyn to one count of conspiring to violate the foreign corrupt practices act. As part of the settlement agreement with the U.S. Department of Justice, it must pay fines of $256 million — half of which will be discounted from hefty penalties it has already agree to pay to Brazilian authorities for the previously disclosed bribe payments. In a related agreement, JBS said it would pay the U.S. Securities and Exchange Commission $26.8 million for accounting irregularities at its U.S. subsidiary Pilgrim’s Pride. J&F’s legal counsel, Lucio Martins Batista, told the court that his family’s company gave cash and gifts, including a $1.5 million New York apartment purchased through a shell company, to five Brazilian officials between 2005 and 2017 to secure J&F financing from state-run banks. Some of the proceeds from the financing deals were used to fund JBS’ expansion in the U.S., where in a span of a few years starting in 2007 it acquired major competitors including Swift & Company and Pilgrim’s Pride...MORE
******************************
Notice we have a government program, designed to side track free competition, run by "leftist governments" who are also doing business with "Venezuela’s graft-ridden socialist government." So much for liberal idealism and a socialist utopia

Bribe recipients include an unnamed official described as a high-ranking executive at state development bank BNDES between 2004 and 2006 who went on to occupy other senior executive branch positions in the leftist governments of Luiz Inacio Lula da Silva and his hand-picked successor, Dilma Rousseff, until 2015.
Sen. Marco Rubio, Republican of Florida, and New Jersey Sen. Robert Menendez, the lead Democrat on the Senate Foreign Relations Committee, have also been pushing U.S. authorities to investigate JBS’ ties to Venezuela’s graft-ridden socialist government. JBS had been a major seller of protein products to Venezuela’s government, which the U.S. has sanctioned as part of its effort to push President Nicolás Maduro from power.

Email ThisBlogThis!Share to TwitterShare to FacebookShare to Pinterest
Labels: +