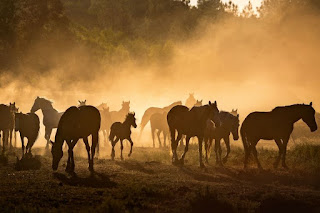 ,..The question of what to do with America’s wild horses is an emotional battle over livelihood, freedoms and how humans view animals. Many ranchers see the mustangs as an overpopulated invasive species that competes for the public land their livestock grazes. Animal rights activists see an icon of the American West that deserves better protection.

There are over 100,000 wild horses and burros on 26.9 million acres of BLM land, according to the agency. This doesn’t include mustangs on Native American reservations, national parks, several U.S. Forest Service territories and lands managed by the U.S. Fish and Wildlife Service. The BLM has failed to keep populations at what it considers a sustainable level. To deal with the so-called excess horses, the agency rounds them up, usually using helicopters, puts them in short-term holding pens, tries to adopt them out, and then sends the unwanted ones — currently over 47,000 — to private, grassy pastures in the Midwest.

With unchecked herds doubling every four years, the program is now in crisis mode. “We’re at a point that we’ve never been before,” says Jenny Lesieutre, a spokeswoman for wild horse and burro issues at the bureau’s Nevada office. “It’s more than three times what the land can sustainably support in the long term, and we are a multiuse agency. That land is shared by all kinds of wildlife and plants.”

It’s illegal for the bureau to euthanize healthy horses, though it euthanizes ones that have such ailments as blindness or club feet. Officials also can’t ship horses to slaughter or sell them to someone who intends to ship them to slaughter. (Though widely taboo, eating horsemeat is technically legal federally; some consider it a cheap source of protein.)

The agency is at a standstill, partly because options like euthanasia or slaughter face intense backlash. “It’s political suicide for a politician to take on the cause of, ‘Let’s save our perennial grasses by killing symbols of the American West,’ ” says Ben Masters, a member of the bureau’s National Wild Horse and Burro Advisory Board from 2015 to 2018. He voted for euthanizing horses and says he received death threats because of it. John Turner, a professor at the University of Toledo who has researched the effects of one birth-control drug on wild horses, puts it this way: “When the agency wants to try something, there are always some groups or organizations that will say, ‘Not on my watch.’ ”

or decades, it was the normal and legal way of life for cowboys and ranchers in the West to round up wild horses and sell them to slaughter for extra cash. These cowboys were called mustangers, and wild horses were considered nuisances that added no value to the land. One Nevada rancher I spoke with said mustanging used to be his “Christmas account.” He received 7 cents for every pound he sent to a slaughterhouse in Nebraska.

He would rope the horses around the neck, pull them down until they fell, and secure their front and hind feet with a hobble, a cuff-like device that makes walking difficult. The horses were usually exhausted and unable to move much. Some mustangers left the horses on the range overnight before hauling them to the corrals; a few might die this way.

In 1950, a secretary and ranch owner from Reno, Nev., named Velma Johnston was driving to work and got stuck behind a cattle truck dripping blood. Wild horses were being transported to slaughter, and from the blood, Johnston deduced that mustanging injured the horses (she said one horse had its eyes shot out). Incensed, she spent the next 20 years fighting for the protection of wild horses. She testified before Congress, appeared on television and was responsible for a Nevada state law banning mustangers’ use of vehicles. In 1961, a film called “The Misfits,” starring Marilyn Monroe and Clark Gable, brutally portrayed mustanging.

A national letter-writing campaign Johnston orchestrated, involving schoolchildren penning pleas to members of Congress, led to the Wild Free-Roaming Horses and Burros Act of 1971. That law — which passed Congress unanimously and was signed by President Richard Nixon — called for the BLM to protect and manage the wild horses that roamed its public lands. Johnston became known as “Wild Horse Annie”: a hero in some circles, an oppressor in others.

After the act passed, the bureau no longer issued permits to ranchers to round up wild horses and claim them as their own. It became illegal for anyone to gather wild horses except the BLM (though that hasn’t always stopped cowboys from mustanging). Paired with the 1934 Taylor Grazing Act, which created grazing districts, public land became even more restricted for commercial use.

The bureau had never before been responsible for an animal, and wild horses and burros are still the only species under its jurisdiction. Neil Kornze, who led the agency during President Barack Obama’s second term, told me it makes no sense that the agency is in charge of wild horses. Many people I spoke with in the world of wild-horse management had little faith in the BLM and offered their own suggestions on how to do the job. Ross MacPhee, a paleomammalogist at the American Museum of Natural History in New York who has studied the origins of wild horses, says the only solution is to create special land preserves similar to those that protect the bison herds at Yellowstone National Park. Trent Loos, a friend of Duquette’s and a rancher on President Trump’s agriculture advisory committee, wants a “stud-hunting season.” Then again, he says, “You could imagine what kind of controversy that would cause.”

AGAIN? AND AGAIN? AND AGAIN? how many time do we have to hear this story on the "wild' horse? There are no limits on the recruitment of "wild horses". Just turn out your saddle or work horses and in a couple of years they will be "wild". Where do you think the current herds of "wild" horses came from? They were not indigenous to North or South America. They were the result of domesticated horses who escaped from expiditioners who came to this country with them. So forget the "wild" and get on with their management!
These same environmental idiots who want to keep the wild horse want to get rid of the cattle which came to the Americas in the same way the horses did. What's the difference? None of them are indigenous. The same environmental idiots want to remove all aspects of the great plains and put them into a buffalo commons to originate the pre-Colombian condition. If that is what they want then they should remove themselves from the Americas and GO HOME!

The only answer is MUSTANG STEW