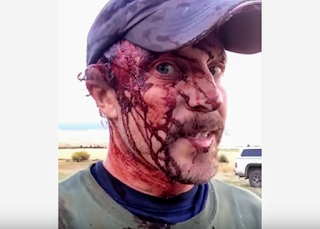 At the nauseating, audible crunch of bones breaking, 42 teeth of a grizzly bear’s jaws ground into Todd Orr’s body at 1,000 psi—enough pressure to crack a bowling ball. Pinned to the forest floor by 400 lb. of raw power and layered muscle, Orr felt scorching waves of pain surge through his nerves, shoot up his spinal column, and roar into his brain as the bear tore through flesh. Resisting the primal urge in every fiber of his being to scream and flail, Orr blanketed the agony with a phenomenal will to survive, and remained passive, listening to the macabre sounds of what should have been death. Legendary. In the annals of survival history, Todd Orr’s account is incredible and magnified by a deuce: He skirted death in two separate grizzly bear attacks separated by mere minutes. Despite infinitesimally lean odds of emerging alive from multiple encounters, Orr staggered from the woods one hour after the attacks and recorded a surreal real-time video, and then drove an hour to a hospital to present his mangled body and half-scalped head to a bewildered medical crew. His chilling tale defies chance or coincidence, and touches a primitive chord. How deep will a man dig in order to stay alive, and how much pain will he endure? On Oct. 1, 2016, Orr answered the questions in harrowing detail.,,MORE
Posted by Frank DuBois at 3:33 PM