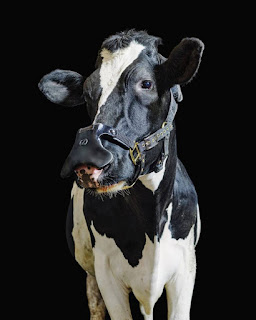 There are 1.6 billion cattle on Earth, and their burps and farts are becoming a big problem. Cows expel methane, a colourless and odourless gas which is approximately 84 times more potent than carbon dioxide when it comes to warming the planet.

As a result, according to a recent report by the Institute for Agriculture and Trade Policy, the combined greenhouse gas emissions of America’s 13 largest dairy companies are equivalent to those of some major fossil fuel giants.

Zelp, a UK-based company, has developed a potential solution in the form of a burp-catching face mask for cows, designed to reduce methane emissions from cattle by 60 per cent. The firm was founded by brothers Francisco and Patricio Norris, whose family run a livestock farming business in Argentina. “We were aware that in every country, methane is one of the biggest contributions to global warming and we found that methane mitigation tools in agriculture are under-researched,” says Francisco. “There isn’t a lot of innovation occurring within the field.”

Generally, solutions to the livestock industry’s methane problem have come in the form of feed additives, which inhibit the production of the gas in the cattle’s stomachs by altering their digestive process.

Instead of changing the animals’ microbiology, Zelp allows animals to digest normal foods without this interference.

Personally, I don't know any Argentinian ranchers living in England. I also don't know any ranchers who sling around such phrases as "methane mitigation tools" or who would say something is "under-researched".
Between the pandemic and global warming, everything will be wearing a mask.
The cowboys will be wearing one. Call it a  Panhandle Pandemic Protector.
The cows will be wearing one. Call it a Methane Mitigation Mask for Mama Cows.
BLM & Forest Service Methane Inspectors will be wearing a Public Employees Pandemic Protector. Or will they? No, they will probably stay in the office and send a drone to conduct their inspection.
All of this caused by what will be called Biden Bovine Burps.
Posted by Frank DuBois at 8:33 PM