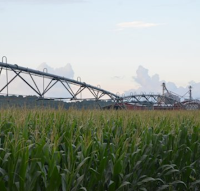 ...The land – located in Seward and Stevens counties in southwest Kansas – featured a mix of center-pivot irrigated land, dryland, native grass, and land with improvements, including sheds, grain bins, and dwellings. Tract sizes ranged from 6.91 acres m/l to 1,085.87 acres, with 10,037.76 FSA cropland acres of which 1,609.45 acres m/l are enrolled in CRP with annual payments totaling over $48,000.

...The auction literature says the Hatcher Farms has built up one of the largest groundwater holdings in the state:

“Over the years, the Hatcher family has developed extensive water rights which authorize approximately 7,900 acres m/l to be irrigated through 54 well-maintained pivots making Hatcher Farms the seventh-largest irrigation groundwater consumer in southwest Kansas. With some of the best water in Kansas, these deep-water wells consistently produce between 625 and 1,950 GPM. With great water and soils, this farming operation has regularly produced crop yields well above the county averages including consistent production of 200-plus-bushel corn. Conservation practices have been actively applied to the farm including the use of cover crops to increase soil tilth and reduce erosion.”

...The seller was Hatcher Farms, an operation with more than 7,000 acres of irrigated land including a 4,999-head feedlot, plus infrastructure including center pivot and pump systems, and grain bins. Each tract’s water rights sold with the property, which sits atop the Ogallala Aquifer.

There were 90 registered bidders in all, with 300 bids placed throughout the auction, which took seven hours, Bruere says...MORE