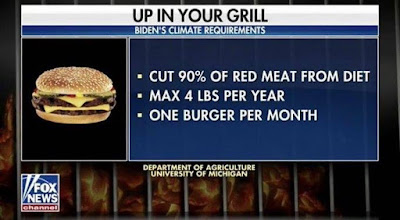 However, in the name of saving the planet, Joe Biden wants to end 90% of America’s beef consumption and 50% of all meat consumption, over-all.

Biden’s climate proposal includes significant cuts to our carbon emissions by 2030, with zero carbon emissions by 2050. The latter goal would require humanity to become extinct because humans produce carbon dioxide naturally just by breathing. But aside from wishing we would all just die off so the algae and spotted owls can prosper, Biden’s climate goals include no more red meat.

But changing the diet of cows so they fart or belch less isn’t enough. Biden has also established the goal of Americans eating 90% less beef.

The Center for Sustainable Systems at Michigan University said cutting small diet-related greenhouse gas emissions by half would be necessary to meet Biden’s 2030 energy goals. However, that would require Americans having to cut their red meat consumption by 90 percent, and cut other animals out by half. In other words, Americans should only consume about four pounds of red meat per year, or about 0.18 ounces daily, which is about a burger a month.

Other proposed changes by the Biden Administration would increase new electric car sales from the current 2% to more than 60% of the market, which would raise the price of electric vehicles (due to supply and demand) to approximately 55k per vehicle. Additional taxes equaling about $3,500 per taxpayer would need raised to accomplish Biden’s goals, and it would require the complete end to petroleum (another industry important for Montana’s economy). MORE