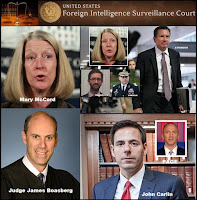 I hate to write this, but there is just no good way to look at this. The Foreign Intelligence Surveillance Court, specifically Presiding Judge James Boasberg, has hired former DOJ National Security Division head, Mary McCord, as amici curiae advisor to the court. [LINK] The placement was first noted by an announcement from Georgetown Law ICAP.

Presiding Judge James Boasberg, is the decision-maker in the appointment of Amici Curiae to the FISA court. There is no way, NO WAY, Judge Boasberg does not know Mary McCord was at the epicenter of the fraudulent FISA application used against Carter Page. Remember, in addition to being the FISC Presiding Judge, Boasberg was also the trial judge in the case against Kevin Clinesmith, the FBI lawyer who lied about Page working for the CIA on the FISA application. {Go Deep}

Mary McCord was also the DOJ-NSD official who went with Sally Yates to confront the White House Counsel, Don McGhan, about the Michael Flynn interview with the FBI. {Go Deep} It was also Mary McCord who had Michael Atkinson as the chief-legal-counsel for the DOJ-NSD -that’s her office attorney- when the FISA application was submitted in October 2016, and renewed in January 2017.

Michael Atkinson went from DOJ-NSD counsel to become the Intelligence Community Inspector General (ICIG). {Go Deep} In that new role Atkinson changed the rules to allow an anonymous CIA whistleblower (Ciaramella on behalf of Vindman) to file the complaint that led to the Ukraine impeachment effort. {Go Deep} Who was the lead lawyer in the Jerry Nadler led House Judiciary Committee? Why Mary McCord of course. Judge Boasberg knows all of this… AND MORE.