At least your wallet will be slimmer! Boris Johnson's posh food tsar urges UK to introduce the world's first tax on sugary and salty food in war on fat 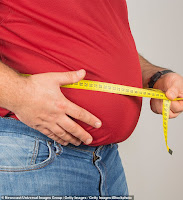 Britain should introduce the world's first tax on sugary and salty food, a report recommends today.

The 'snack tax' could add £3.4billion a year to families' shopping bills, with a 60p Mars bar costing 9p more.

With 56million people currently living in England, it means £60-per-year will be added to each person's food bill on average - £240 for a family of four.

The money should be used to pay for GPs to prescribe fruit, vegetables and cookery classes on the NHS to help prevent obesity and ill-health, the Government-commissioned review says.

Mr Dimbleby said the tax will encourage firms to reformulate their recipes or reduce portion sizes. He warned that unhealthy food was 'putting an intolerable strain on the NHS', with more than half of over-45s living with diet-related health conditions...MORE

First establish national healthcare, then to control costs you tax certain foods or certain behaviors, then finally to rationing of healthcare.