The West's historic drought in 3 maps

Vast swaths of the West remain in a historic and unrelenting drought, the worst in the region in at least 20 years.

Drought conditions as of Thursday expanded and worsened in the West, especially in the Pacific Northwest, after another week of hot and dry weather, according to the US Drought Monitor.
Across the US, the drought has nearly doubled in size from this time last year. Around 25% of the country was in drought conditions in July 2020; as of this week, nearly half is in drought.
In addition to mandatory water restrictions already in place, even stricter cuts are looming amid the drought in some states as water levels plummet along the Colorado River.
Climate change is playing a key role in these compounding crises: Drought and extreme heat are fueling wildfires; reduced snowpack and the lack of substantial precipitation are exacerbating water demands for millions of people, as well as agriculture, ecosystems and deteriorating infrastructure. 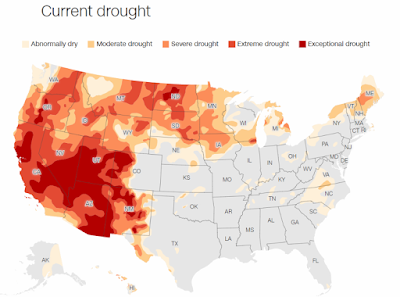 Streamflow, a measure of how much water is carried by rivers and streams, is another significant indicator of drought and its impact.
As drought conditions have worsened in 2021, hundreds of stream and river locations are experiencing below-average flow. More than 50 percent of the western monitoring stations reported lighter-than-usual flows. Fishing restrictions have also been put in place on many rivers in Montana due to low flows and warm waters.
Changes in streamflow affect the water supply for our own municipal use, crop irrigation and power generation. 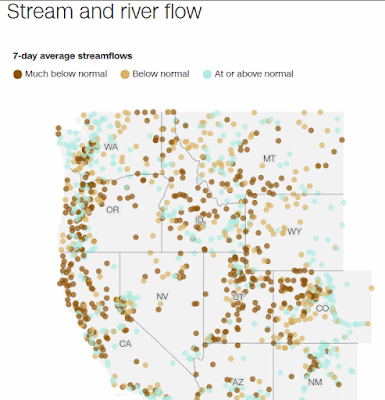 READ ENTIRE ARTICLE
Posted by Frank DuBois at 6:47 AM