And sagebrush and ponderosa pines

I love them old time waltzes

Than to lay eyes on you.

I love old corrals, too. Chances are I would have liked the cowboys that worked in them just as much. Sagebrush wasn’t part of our lives, but ponderosa pines were. Yea, there is nothing sweeter than the smell of a ponderosa pine on a warm, still afternoon. In some ways, that is the smell that was always the standard for the comparison of smells everywhere else.

Nothing ever quite measured up.

As for cowgirls in old pickup trucks, there was one, and she fit. There is a canyon named after her when one deer season she left that old pickup truck parked in neutral, and it rolled off the hill.

From McFarland and Earlimart, to Madera, and on to Clarksburg, vineyards, even more than their wines, will always be part of this life. Sitting in the backroom in the Tesei’s little white house just off 99 with the Madera wine posse was an honor. Those guys became friends. So, too, it was with other close friends and colleagues growing fruit that went to places like Fresno, Glen Ellen, Madera, Guerneville, and Napa.

Certainly, old time waltzes. We waltzed alone one night on an empty dancefloor down on the river at Kingsburg. Afterwards, a Westerner came up to us, grabbed our hands, and introduced himself.

You are either from Texas or you’re from New Mexico, aren’t you?

As for George and Emmy Lou, Emmy Lou alone makes the cut, but Bob Wills is still king along with preferred others. There just aren’t enough waltzes on modern dance floors, and there haven’t been for decades.

As to lay eyes on you, the one that matters knows. I’ll be reminded one of us is the younger.

Kenny’s funeral was imminent, but he had rallied so many times perhaps there could be one more. In the end, there wasn’t. For 21 years, he fought that dreaded disease that strikes too many. During that time, he touched so many lives.

I had no idea he was born in Kerrville. His family moved to Deming when he was little, and it is there that so many people came to know what a gentleman Kenny Treadwell was. In a text after the service, a message read Heaven welcomed a special Angel this day. Indeed, it had.

That trademark smile was what always greeted everyone.

I told both of his sons that their dad was a true gentleman and how much I appreciated him. What I thought then was a special effort, he had greeted us warmly when we first came back to become part of this ranching community. That is not always an easy entry, but Kenny never failed to offer a kind word and inquire how things were going.

Some description about how starched jeans and shirts not fitting into the echelons of society held no credence with this emissary of the West. He would have done us proud in every circumstance. He was classy in world that has largely forgotten what it means.

The tag lines reminded us he was a friend, a cowboy, a rancher, a father, and a grandfather. He was a world champion. He was a successful businessman. He was a man of God. He was loved. He offered love. His word was gold. His smile was priceless. We are better because we knew him.

We will miss him.

Tomorrow and the Next

I called Dusty and Walt when I got home.

It’s a big birthday for the former and nearly as big for the latter. Listening to the conversations, the one who claims she is the youngest of the group chimed in to remind us of that perpetual condition.

We talked about rain.

There is a funny thing about these folks who wear starched shirts and jeans. We all have tan lines that map the end of our shirt sleeves, the V at our collars, and a horizontal line across our foreheads. It’s as much an indicator of the affiliation of the trade as it is a feature of our dress.

This whole friendship thing is that way. We aren’t just thrown into a void and bob to the surface having order in our lives. This is a give and take affair and a whole bunch of days of diligence.

Asked what they did on their birthdays, both indicated they worked.

The truth of the matter is they watched the sky as much as they worked. Work is forever while the gift of rain is only occasional. We are all witnessing a hint of green and that gives us hope. It’s like a bad habit, though. Get a little and more is wanted.

Dang, if it would only rain another inch!

Last weekend there was another gathering of folks with tan lines.

The 137th anniversary of the arrival of Peter Shelley on Mogollon Creek was celebrated. It was there some of his descendants gathered in his memory and their continuing relationship with a land he taught us to call Home.

Not being there very often, the drive off Sacaton Mesa to the creek bottom at the 916 never fails to promote goosebumps. With the mountains in the backdrop, my goodness, it simply fills you with wonder. The experience is spelled AWE in capital letters.

And, we gathered, and talked, a prayer was offered, and we ate.

About dessert time, thunder echoed down the canyon. Then, there were some rain drops, but there was silence in the crowd. Expert eyes directed skyward had deducted there weren’t enough clouds to offer anything.

That was a promise for another day. 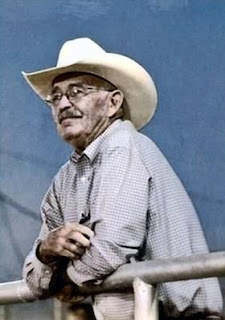 I met Kenny Treadwell when he first started putting on team ropings. I second everything Wilmeth said about him. A great smile, always welcoming, with a little bit of humor twinkling in his eyes. I won my first trophy saddle with his youngest, Phil, heeling for me. I believe he was 16 at the time, and he handled the whole thing in a more mature fashion than I did.

My condolences to the whole family ~~~ Frank DuBois