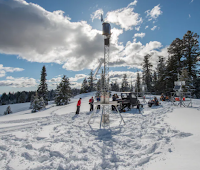 As the first winter storms rolled through this month, a King Air C90 turboprop aircraft contracted by the hydropower company Idaho Power took to the skies over southern Idaho to make it snow.

Flying across the cloud tops, the aircraft dropped flares that burned as they descended, releasing plumes of silver iodide that caused ice crystals to form and snow to fall over the mountains. In the spring, that snow will melt and run downstream, replenishing reservoirs, irrigating fields and potentially generating hundreds of thousands of additional megawatt hours of carbon-free hydropower for the state.Idaho Power, a private utility serving more than half a million customers in southern Idaho and eastern Oregon, has used cloud seeding to pad its hydroelectric power production for nearly two decades. But over the past few years, the utility has ramped up its snow-making efforts at the behest of state officials concerned about dwindling water supplies.

This year, the western United States is in the midst of one of its worst droughts in recent memory. As of Tuesday, about one-third of the country — mainly west of the Rocky Mountains — is experiencing severe to exceptional drought. Nearly all of Idaho is under at least a severe drought.

Today, Idaho cost-shares the cloud seeding program, estimated to produce 1 million acre-feet of additional water annually, to the tune of about $2 million a year. In April, the state passed a bill to expand its cloud seeding efforts.

Residents of the Gem State aren’t the only ones embracing cloud seeding, a 75-year-old technology that many scientists still view with skepticism. With a recent experiment providing the first unambiguous evidence that cloud seeding can increase snowpack levels, research into artificial rainmaking is undergoing a small renaissance.

As the West experiences a historic drought and climate models point to more dry spells in the future, states are doubling down on their cloud seeding programs...MORE

A fairly extensive article on the topic from the Washington Post, also with some info on the Colorado and Utah programs.
When I was at Interior this subject came up. If federal dollars are used to fund or partially fund the program, I kept asking "Who owns the additional water?",  "Who decides what amounts for what uses?" "Are the additional waters subject to NEPA, ESA & CWA considerations?" I never really received the answers.

There are also unintended consequences that come. Here in the Sierra Nevada range, structures are designed to resist varying snow loads. Years back, before they stopped the practice of cloud seeding, we had some natural precipitation events, where it snowed on top of the "man made" snow, resulting in structural failures as well as localized flooding in the valleys after a warming trend.