Origins of the Santa Fe Trail re-created on 200th anniversary 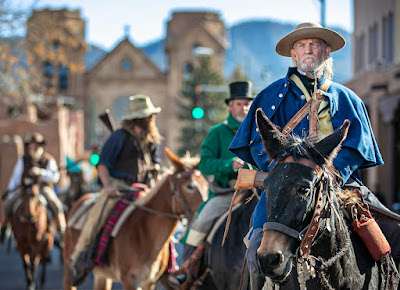 WEST
Many of the people standing on the Plaza took out their cellphones to do something their antecedents could not do 200 years ago.

Or, at least, record a re-creation of history, as modern-day horsemen played the role of the 19th century trader William Becknell and compatriots and rode into the Plaza on Sunday morning to mark a major historical event that, some say, redefined not only New Mexico but much of the United States: the start of the Santa Fe Trail.

This past weekend marked the 200th anniversary of Becknell’s arrival in Santa Fe, where he was greeted by Gov. Facundo Melgares, the first Mexican governor of New Mexico, after that nation won its independence from Spain and in turn opened the doors to trade with other countries — a practice the Spanish government prohibited.

The opening of that trade trail from Missouri to New Mexico in 1821 left an indelible impression upon the Southwest, historians say. Besides building an economic bridge between a nation still celebrating a relatively new independence from Great Britain and a nation that won that independence just months before, the trail opened up the pathways to the West...MORE

Email ThisBlogThis!Share to TwitterShare to FacebookShare to Pinterest
Labels: New Mexico, The West