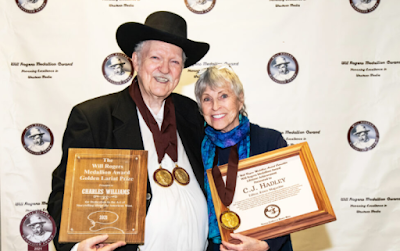 RANGE magazine editor Caroline Joy Hadley (CJ to those who know and love her) was honored with a “Lifetime Achievement Award” by the Will Rogers Medallion Awards (WRMA) committee at their annual banquet in Fort Worth, Texas, on Oct. 23, 2021, for her three-plus decades of superlative work portraying “The Cowboy Spirit on America’s Outback.” CJ began publishing RANGE in 1991 and served as publisher and editor of the magazine itself as well as numerous books about ranching and the popular Real Buckaroo calendars. Having been graced with many Will Rogers Gold Medallions in years past, CJ easily qualified for the award and became its first honoree. WRMA explains:
"The Lifetime Achievement Award recognizes authors, publishers and illustrators who have made significant contributions to Western Literature and Media throughout their careers. To be eligible, recipients must have received at least one Will Rogers Medallion in three different years; demonstrated a consistently high level of excellence in publications and/or media; and diligently combined entertainment with an understanding of the history, traditions and values of the American West. Additionally, recipients must have shown enduring respect for the West's history, values and traditions as Will Rogers himself demonstrated through written, visual, and recorded media over his lifetime. His career serves as the standard by which all Lifetime Achieve­ment Award recipients are judged for their contributions to the ongoing legacy of the American West."

The commendation on CJ’s WRMA plaque reads, in part:

In recognition of her exemplary leadership and editorial talents in publishing the consistently high quality of RANGE magazine and its library of outstanding publications, all demonstrating her commitment to furthering the well-being of rural Americans and the survival of their farm-and-ranch way of life while celebrating the beauty and sanctity of the Western landscape and its unique inhabitants, both animal and human, and protecting Americans’ precious Freedoms as gifted to us by the hard work, sacrifices and blood of our forebears.

RANGE magazine also won two Will Rogers Gold Medallions for the book “Quinlan & Jones”; one for its writers and illustrator, the other for overall quality and graphic design. CJ says, “When Charles Williams announced the award at the banquet I was stunned. I wept. That is one sweet and lovely gift!”