Totalitarianism and the Five Stages of Dehumanization 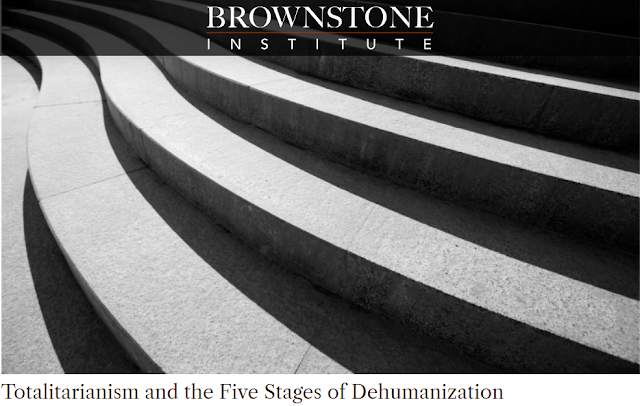 ...Every reader, but especially politicians and journalists, interested in human freedom, democracy and the rule of law, should carefully read Chapter 11 on “The Totalitarian Movement” in Hannah Arendt’s much-acclaimed book. She explains how long before totalitarian regimes take actual power and establish complete control, their architects and enablers have already been patiently preparing society – not necessarily in a coordinated way or with that end-goal in mind – for the takeover. The totalitarian movement itself is driven by the aggressive and at times violent promotion of a certain dominant ideology, through relentless propaganda, censorship, and groupthink. It also always includes major economic and financial interests. Such a process then results in an ever more omnipotent state, assisted by a host of unaccountable groups, (international) institutions and corporations, that claims to have a patent on truth and language and on knowing what is good for its citizens and society as a whole.

Although there is of course a vast difference between Communist totalitarian regimes of the 21st century that we see in China and North Korea, and Western liberal democracies with their growing totalitarian tendencies, what seems to be the unifying element between the two systems today is thought control and behavioral management of its populations. This development has been greatly enhanced through what was coined by Harvard professor Shoshana Zuboff as “surveillance capitalism.” Surveillance capitalism, Zuboff writes, is “[a] movement that aims to impose a new collective order based on total certainty.” It is also – and here she does not mince her words – “[a]n expropriation of critical human rights that is best understood as a coup from above: an overthrow of the people’s sovereignty.” The modern state and its allies, whether communist, liberal or otherwise, have – for the above and other reasons – an insatiable desire to collect massive amounts of data on citizens and customers and to use this data extensively for control and influence.

On the commercial side, we have all the aspects of tracking people’s behavior and preferences online, brilliantly explained in the documentary The Social Dilemma, confronting us with the reality that “Never before have a handful of tech designers had such control over the way billions of us think, act, and live our lives.” At the same time we see in operation the “social credit” system rolled out by the Chinese Communist Party that uses big data and permanent CCTV live footage to manage people’s behavior in public areas through a system of awards and punishments.

The mandatory QR code first introduced in China in 2020 and subsequently in liberal democratic states around the world in 2021, to keep permanent track of people’s health status and as a prerequisite for participating in society, is the latest and deeply troubling phenomenon of this same surveillance capitalism. Here the dividing line between mere technocracy and totalitarianism becomes almost extinct under the guise of “protecting public health.” The currently attempted colonization of the human body by the state and its commercial partners, claiming to have our best interests in mind, is part of this troubling dynamic. Where did the progressive mantra “My body, my choice” suddenly go?

...In the following, we will look more closely at some of the basic tenets of the totalitarian movement as described by Hannah Arendt and how this enables the dynamics of institutionalized dehumanization that we observe today. In the conclusion, we will briefly look at what history and human experience can tell us about freeing society from the yoke of totalitarianism and its dehumanizing policies.