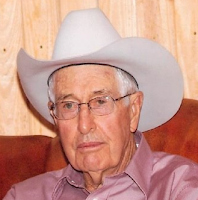 At the time of Dogie’s birth, his father Butch, a veterinarian, was manager of the Forked Lightning Ranch at Pecos, New Mexico owned by famed rodeo producer Tex Austin.  His Mother Doreen, originally from South Africa, was among the Boer settlers who immigrated to the Americas after the Boer wars. They later moved to the family’s ranches at Watrous, New Mexico, where Dogie and his younger brother Charlie grew up.

During World War II, Dogie begged his parents’ permission to join the service in 1943, as he was only 16 years old.  They finally relented, and Dogie the cowboy became Dogie the sailor in a war that had engulfed the entire globe.  He was a gunner on the USS Copahee, an Escort Carrier that crisscrossed the Pacific transporting everything from replacement combat aircraft and munitions to captured enemy planes.  Dogie saw combat action and typhoons, endless boring water and exotic islands and, at the end of it all, returned to New Mexico and the ranch life he loved.

In the late 1940’s Dogie, accompanied by his wife and child, went to Mexico with the “Fievre Aftosa” campaign to eradicate Hoof and Mouth disease in that country, working in numerous areas including San Luis Potosi and Leon, Guanajuato.

In the early 1950’s he purchased the family’s Hashknife Ranch from his grandmother, becoming the fourth generation on the ranch established by his great grandfather William Kronig in the mid-1800’s.  Supplementing the ranch operation, he worked as a lineman for the regional telephone company and later joined the New Mexico Cattle Sanitary Board as a cattle inspector.  For a time, Dogie was also on the faculty at New Mexico Highlands University, teaching leathercraft.

He made a career with the New Mexico Sanitary Board, later reorganized as the New Mexico Livestock Board, and served as its Executive Director from 1979 until 1985.  After retiring from the agency in 1988, he devoted full time to the Hashknife Ranch, active in its operations right up until his passing.

Dogie had a keen eye for good livestock, especially horses.  He built one of the highest quality horse operations in the region, and was a recipient of the American Quarter Horse Association’s 50 Year Legacy Award.   His stallions and mares were well known and sought after across the country.   Fine horses and cattle were always synonymous with the Hashknife brand.

George Meredith “Dogie” Jones was a cowboy, a horseman, a war veteran, a rancher & farmer, and a leader.  He was a husband, father, grandfather, and great-grandfather whose 95-plus years took in a large slice of the sweeping history of the country and the State of New Mexico.

A granddaughter, Avery Culbertson, said it this way: “He gave me a knowledge and appreciation for family heritage and a healthy respect for a good rain on good land. He exemplified the values of hard work and excelling at a craft; be it leather work, wood work, farming, gardening, or breeding good horses and cattle.  He had a thirst for knowledge. He was independent, persistent, tenacious and had an epic stubborn streak. He would get after me for being so stubborn and I would simply ask him in response, “well where to you think I got it from?” Most of all, I will always appreciate his zest for life and adventure, and his curiosity. I will miss him.”