Of Baseball and Barbed Wire Fences

Of Baseballs and Barbed Wire Fences 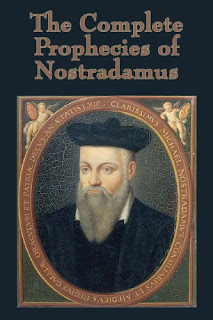 Michel de Nostredame, more commonly known as Nostradamus, was the French astrologer who has been the pulp crew’s seer of the future. His fame comes from his 1555 book, Les Prophéties, a collection of 942 future predictions.

There are folks who put a lot of confidence in his glimpses of the future. Others have said his predictions are simply and purposely vague and can be applied to virtually anything.

His life was similarly lived in a time and place that mirrors our modern existence. At the forefront of this comparison is the likely corona virus of his day, the plague of 1534, which took the lives of his first wife and their two children.

Michel lived through the ordeal, remarried, and was writing and siring children in earnest by 1550. His platform was based on his astrological prowess. It quickly attracted various wealthy patrons. Catherine de’ Medici, a proxy for the modern left-wing Tides or Gates Foundations personalities was one of his most notable supporters.

Being the sharp cookie that he was, his predilections for his contributors were expanded and polished into the notable style that has kept his work prophetic to this day. Indeed, the mix and match misinterpretations and mistranslations of his approach remain a mainstay of noted journalistic institutional curriculum to this very day.

If you don’t believe that, simply observe how the two parties in Washington, schooled and ensconced in constitutional piracy and blatant pilfering of the masses, interpret economic reporting each and every day.

It is with that backdrop that we find ourselves in this new year.

The sometimes-resident of the People’s House keeps his tongue and his wit sharp by reading off the monitor until such time as his attention drifts off to inventing new words or securing ice cream rations for the day. It also appears he’s going to take a shot at training another dog. The new pup was seen cavorting on the beach in New Jersey with master and mistress. There is skepticism, though, if his previously failed schooling techniques will be altered enough to keep his security detail safe from dog bite.

Neither does the scene when the House majority team toddles out without their walkers to make yet another decision statement that alienates half of the citizenry. Holy Cow! The visual reminder of that scene doubles down on the need for term limits not just to save the Union but to seek new genetics to protect the herd from evolving calamity trends.

Then, we go offshore. Only the ag press is making issue of the fact the Chicoms are hoarding strategic stockpiles of critical inputs. Grain is part of that deal, but so are protein stocks and certain metals that that country has limited access to. They are building coal infrastructure that dwarfs anything the world has yet witnessed. As a last but not final signpost, is the fact that Taiwan will be hard pressed to defend itself in the coming conflict. Bravado and action are seldom unitary.

The Ukrainian standoff is no different. Just 80 years ago the Third Reich viewed conquest of that land and its der Untermensch as vital to the future grain production and homeland for the Aryan race. Putin now adds energy and pipelines to the mix.

All the while, the central power hub in our country obsesses on theoretical and imaginary reverse engineering projects. Their priorities have become CRT, killing babies, open borders, wealth redistribution, dissolution of the petroleum business, climate obsession, environmental hooliganism, theoretical world order, and endless pandemic shenanigans that threaten our entire existence.

If not laughing hysterically, Putin and Xi have to be smiling.

Since nothing else is working in Washington, the scribes have turned to interpreting the 2022 Nostradamus promises.

Since their 2021 forecasts were utter failures, the astrologers, numerologists, and tarot readers who have the inside in interpreting his predictions claim there are five primary predictions for 2022. Alas, current issues were magically manufactured!

First, there will be the death of a political figure. Next, there will be global warming. That will be followed by inflation. The rise of artificial intelligence will be next, and then, the European union will fail.

For fun, the artificial intelligence evidence was investigated for clarity and substance.

The moon in the full of night over the high mountains

The new sage with a lone brain sees it

By his disciples invited to be immortal

Eyes to the south. Hands in bosoms, bodies in the fire.

Excuse me, but to read the emergence of artificial intelligence into that prediction must refer to some sort of cosmic computer programming script. The only thing that makes sense is the suggestion that there might be one individual out there somewhere, the guy with the lone brain, that sees their nonsense for what it is.

Of Baseballs and Barbed Wire

For all intents and purposes, our flag, the national banner of our Union, has been shuffled aside from substantive display.

Oh, sure it is there for token backdrop, but the legions of its abusers are on to more enlightened displays of pressing, theoretical idea discoveries. They have displaced it with the pandemic mask, that sanitary napkin like device that we are being forced to wear over our faces.

It is interesting to visit with representatives of the veterinarian medicine community regarding this and other subjects. They seem to be the only portion of the medical industry that is united in the suspicion of the whole mess. Their assessment of the mask sums up the quandary our society finds itself.

Sure, they (the masks) probably do some good … even a four-strand barbed wire fence deflects a baseball occasionally.

Who cares about Nostradamus? And as far as "inventing new words," anyone for "covfefe"?

That was a new one to me:

"Covfefe (/koʊˈfɛfi/ koh-FEH-fee)[2] is a misspelling, widely presumed to be a typo, that Donald Trump used in a viral tweet when he was U.S. President. It instantly became an Internet meme.

Six minutes after midnight (EDT) on May 31, 2017, Trump tweeted, "Despite the constant negative press covfefe".[3] He deleted the tweet six hours later and implied that its wording was intentional. Most media outlets presumed that he had meant to type "coverage". White House Press Secretary Sean Spicer stated, "I think the President and a small group of people know exactly what he meant."[4] The term has since been widely used in internet memes and merchandise, and inspires both popular-level and scholarly analysis of language and messaging by the Trump administration." https://en.wikipedia.org/wiki/Covfefe

I am looking for and I love to post a comment that "The content of your post is awesome" Great work!
internship for web development | internship in electrical engineering | mini project topics for it 3rd year | online internship with certificate | final year project for cse