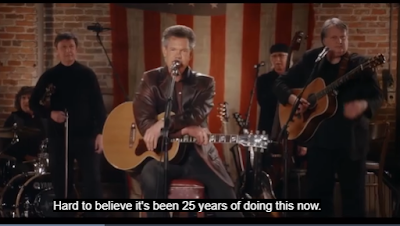 .. The new documentary Randy Travis: More Life started out as a concert film honoring the 25th anniversary of his triple platinum debut album, 1986’s Storms of Life. Filmed in January 2012, director Shaun Silva says they had a locked edit of the original special when they learned of Travis’ illness. Shelved for nearly a decade, it now includes the original performances alongside archival footage and new interviews which tell the story of Travis’ career before and after the event which permanently altered his life. It is currently available to rent, as well as being serialized on the artist’s YouTube channel, with seven episodes premiering every two weeks through July 7.

Country music was at a crossroads in the early 1980s. With countrypolitan crossover pop on one side and Southern rock on the other, what dominated the charts hardly sounded like country anymore. Enter a lanky singer from North Carolina whose lush baritone looked back to legends Lefty Frizzell and Merle Haggard for inspiration. Along with such artists as George Strait and Patty Loveless, Travis was part of country’s neotraditionalist movement which breathed new life into the genre while evoking the glory of its past. Despite their authentic so

Before we hear a note of music we see Travis in 2017, making his first public appearances after years in recovery. This is followed by a slew of news reports about his stroke, a stroke which almost killed him and robbed him of his mobility and voice. Travis should not be pitied, he’s led an amazing life and is surrounded by those who love and care for him, including his wife Mary, but it’s not easy viewing, watching him struggle with the basics of motion and communication.  und, their crossover success kicked down the doors for generations of country artists to come.

Here is the trailer to the documentary, followed by Episode 1 from his youtube channel.

Hello There. I found your blog using msn. This is a really well
written article. I’ll make sure to bookmark it and come back to read more of your
useful info. Thanks for the post. I’ll definitely return.

Pretty good post. I just stumbled upon your blog and wanted to say that I have really enjoyed reading your blog posts. Any way I’ll be subscribing to your feed and I hope you post again soon.

Greetings! Very useful advice within this
article! It’s the little changes that make the greatest changes.
Thanks a lot for sharing!

That is really fascinating, You're a very skilled blogger.
I've joined your rss feed and stay up for in search
of more of your excellent post. Additionally, I've shared your site
in my social networks

Wonderful article! We are linking to this particularly great content on our
website. Keep up the great writing. 먹튀검증