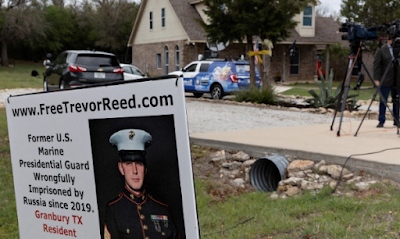 A U.S. Marine freed from imprisonment in Russia in a prisoner exchange conducted on April 27 has now been reunited with his family, the Department of State confirmed in an email to National Review.

Trevor Reed, a 30-year-old former Marine infantryman and student at the University of North Texas, was arrested in 2016 while visiting Moscow with his girlfriend, Lina Tsybulnik. The Russian Government alleged that Reed, after being detained by police while publicly intoxicated in Moscow, grabbed the arm of the officer while being driven to a police station — causing the police vehicle to swerve into another lane.

The events were the subject of a dispute, with Reed’s family hiring lawyers and videography experts to contest the Russian government’s version of events. That year, he was sentenced to nine years’ imprisonment at a labor camp. U.S. Ambassador to Russia John J. Sullivan had described Reed’s trial as a “theater of the absurd,” alleging that it was a sham designed by Russia to gain diplomatic leverage...MORE

Do you know how to check current location pin code? if no then you can check Pincode of my location and also know about what is dopbnk ?