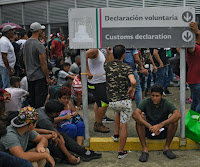 The Biden administration is planning to send illegal immigrants awaiting immigration proceedings deeper into the United States to deal with the surge in border crossings, according to internal documents obtained by NBC News.

DHS plan is to use federal funding to send migrants to shelters in Los Angeles, Albuquerque, Houston, and Dallas, according to NBC News.

The NBC report comes two weeks after senior Department of Homeland Security officials said they were concerned they would not have enough funding and resources to cover the flood of illegal crossings that will almost certainly occur when Title 42 is lifted – they are expecting up to 18,000 per day...MORE