The Matter of Nondelegation Doctrine

Deflation of the Southwestern Landscape

The first time they tried to promote legislation in naming the Gila a wild and scenic river we were told we would be given 25 years to live in our homes and then we would be required to move.

Once again, the crafting of the plan to name the upper headwaters of southwestern New Mexico’s Gila River as a Wild and Scenic River has made its way through the office of the state’s senior senator. Early in June a hearing will be held in Washington to reexamine the merits of the plan that will forever curtail development along those stretches of the free-flowing Gila.

As has been the case of every other recent year attempt to layer another protective designation on the area’s lands, the fingerprints of the New Mexico Wilderness Alliance have been all over not just the draft legislation, but the entirety of the plan complete with the fine details of where the administrative boundaries will be fixed. It is only when the process moves to public disclosure do local landowners and their conservative representatives learn what is in store.

In not one of these packages, have the concerns, the requested changes, or long-term protective measures requested by those locals been honored, accepted, or written into the legislation.

Respected Members of the Senate Energy and Natural Resources Committee

As members of the Senate Energy and Natural Resources Committee, you will be participants in the determination of the merits of the M.H. (Dutch) Salmon Greater Gila Wild and Scenic River Amendment which impacts the major watershed, the Gila River, of Catron and Grant Counties, New Mexico. You will have extensive forehand information on the merits of the inclusion of the Gila in the Wild and Scenic River inventory. There will be an absence, however, of slick sheet influenced public opinion regarding the local community’s position on this matter. The reason is simple. As has become the trademark of restrictive federal designations in southwestern New Mexico, the scope of a project is worked out by the NGOs of interest and placed in the hands of officials who will shepherd the action to fruition. Local citizenry and leadership impacted learn of the plans only after the actions are in process. As such, they find themselves continuously fighting from behind and are largely belittled in their attempt to maintain the heritage that spans their homelands and constitutes their way of life.

I could offer objective rationale why the amendment of reference should be tabled as it stands, but there is another, higher level matter at hand. The federal government demonstrates little inclination to defend the sovereignty of this local citizenry and its cultural needs. Time and again the outcome has been blatantly antagonistic to even their simplest requests. Further, the progression following protective land designation overlays only prompts yet higher-level use restrictions. The people and the elected leadership with roots in the area know this from repeated, past experience. The symbolism to them has become automatic. Whatever the lead NGO has worked to create gets done regardless of outcry.

The outcome is so predictable. The loss of regional character is real. Only 38% of Grant County is privately held. Agriculture, mining, and the various service providers make up most of the private business. In one form or another, the rest is government. Designations of recreation and restricted land privileges have not been kind to this county. Its population has declined 5.5% since 2000 (against a statewide backdrop of 14.35% increase) and the explanations of losses are like nearby Catron and Hidalgo Counties that cannot keep young people because there is so little opportunity. Drugs and strife are rampant. Despair is contagious and the spiral only expands.

Grant County’s surface water equates to .1% of its footprint and this amendment will guarantee that will never change regardless of future developments. That is simply not wise nor is it fair. In an era of environmental privilege against local citizenry, this is yet another test case of rights whereby affluent absentee stewards hold dominion over local concerns and needs. This is foundational Americana. It is no less than a cold war waged against the very people who have brought these landscapes to the present only to be judged iconic in the slick sheet executive summaries that you will read, and the senator of record will espouse. These locals deserve credit and an equal voice against the national environmental organizations arrayed against them. Our country faces too many truly critical issues to stack one more contrived land designation against rural America.

My letter is addressed to you for the simple reason both of you seem to exhibit the rare decency of individual thought. Take a look at this and the concerns of the locals who have staked their lives and future on this outpost much closer to the Mexican border than what much of Washington apparently deems civilization. In all cases, their private property rights need to be elevated to an object of continued preservation rather than a use arrayed against a backdrop of federal domain.

This is their home. They need a victory. More importantly, they need a signal Washington actually cares about the plight of the American citizen.

A rancher from southern New Mexico

A landowner in the Gila River Valley

A descendent of the First Family of American Wilderness

Deflation of the Southwestern Landscape

A word from the Constitution is going to be used in this context to describe that portion of the area’s population that has been treated with contempt and condescension repeatedly in such actions over the past 110 years. The natural born citizenry has little influence over its existence.

That is a deep-rooted issue that has direct implication regarding the current matter, but it also points to a deeper conflict that the West suffers on a grander scale. Local citizenry across the West is largely underrepresented if not unrepresented. It is the same problem that plagued the small states in their attempt to protect themselves from the greater populations of the more powerful states at the time of the founding.

That problem is made exponentially worse by the delegation of the conceptual planning and public grooming process of ever more restrictive land protection designations to nongovernmental organizations (NGOs). With huge budgets, the ear and complicity of senatorial offices, and controlled planning vacuums, the natural born citizenry is defeated from the jump. They have no chance. They have been hustled aside and such atrocities have been intentionally loaded with interlocking shields of political isolation.

There is a growing awareness, however, that, if the process is not outright illegal, it reeks of Constitutional deficiencies. This matter of nondelegation doctrine must be evaluated and debated. Nondelegation doctrine comes from the principle of administrative law that Congress cannot delegate its legislative powers to other entities and that includes agencies and NGOs. The truth has long been that Congress has delegated legislative powers away constantly to those agencies and the immense influence of NGOs. Rural America and especially the West has been blistered by such dallying.

We are left with the realization that congressional impropriety has robbed the delegated power away from We, the People, who, in a free society … remain the only bridge to pass such freedom along to others.

Stephen L. Wilmeth is a rancher from southern New Mexico. “The question must be asked … if states had actually been elevated to free and equal status and senators were still required to protect state rights by their required allegiance to state government, would this country be in the state it is today?”

Posted by Frank DuBois at 12:56 PM No comments: On Monday and Tuesday, some of the most influential minds in Idaho water usage are in Sun Valley discussing some of the realities facing the Gem State’s water supply.

But, the annual Water Law and Resources Issues Seminar is a place where those challenges often find solutions.

“If we keep spending money the way we’ve always been spending money, we’re going to be in the same place as soon as that money is gone,” said CEO of The Freshwater Trust, Joe Whitworth. “What we have to do is coordinate that and integrate that so that an entire watershed can benefit in a quantified way.”

Arrington knows this week could have a massive impact on Idaho’s ability to continue to be the agricultural hub it has been known to be and is ready for the challenge...MORE

Posted by Frank DuBois at 8:38 PM No comments:

A major drought reveals a 3,400-year-old city near the Tigris River 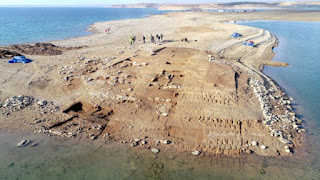 With the northern hemisphere switching to summer, we started to come across more drought news from different countries such as India, Pakistan, Mexico, and the United States. Iraq is also one of these countries that have been suffering from the consequences of drought. A new consequence, however, has stood archeologists in good stead.

The drought that has hit Iraq in recent months caused the Mosul reservoir - the most crucial water storage in Iraq- to shrink, which led to the revelation of a 3,400-year-old Mittani Empire-era city submerged for decades. The ancient city is located on the Tigris River in northern Iraq.

The results of the excavations were revealed in a press release by the institute.

The dam was built in the 1980s before the settlement was examined and cataloged archaeologically. Therefore, the re-emergence of the ancient city named Kemune has provided a once-in-a-lifetime opportunity for scholars to investigate it before the water level escalates and it gets resubmerged again.

Posted by Frank DuBois at 8:35 PM No comments:

A once-in-a-lifetime drought in the western part of the US is turning up dead bodies - but that's the least of people's worries.

Sitting on the Arizona-Nevada border near Las Vegas, Lake Mead - formed by the creation of the Hoover Dam on the Colorado River - is the largest reservoir in the United States and provides water to 25 million people across three states and Mexico. Here, the stunning scale of a drought in the American west has been laid plain for all to see.

The water level is now so low that bodies of murder victims from decades back, once hidden by its depths, have surfaced.

One was stuffed in a barrel with a gun shot wound - presumably because someone thought it would stay unnoticed at the bottom of the vast reservoir forever.

While the dead bodies are fuelling talk about Las Vegas' mob past, water experts warn of even more worrisome consequences. If the lake keeps receding, it would reach what's known as "dead pool" - a level so low the Hoover Dam would no longer be able to produce hydropower or deliver water downstream.

Californians have have been told to conserve water at home or risk mandated water restrictions as a severe drought on the West Coast is expected to get worse during the summer months.

People have been told to limit outdoor watering and take shorter showers. In Los Angeles, many are being asked to cut their water use by 35%. The restrictions come after California recorded the driest start to the year on record...MORE

Posted by Frank DuBois at 7:56 PM No comments: