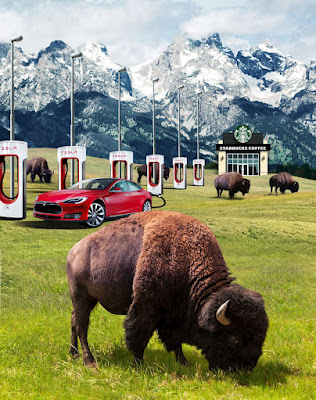 Today’s run on land out west is spreading not American power but five-star living dressed up as frontiersmanship. Welcome to the home of end-table antlers and Escalades.

On a snowy April afternoon in the rugged empty beauty of remote western Montana, I go out shooting with two guides at what may be America’s most expensive ranch. They pick me up in an SUV with heated seats, they lend me gloves, and we drive out to the range, past the Ranch at Rock Creek’s 70 or so horses, listening to George Strait and Brooks & Dunn on a Sirius country station. We don’t see any people, only a group of white-tailed deer. I practice shooting clay targets meant to emulate the flight of ducks. I am taken aback at first when the guides have me load my own rounds of ammunition into the gun instead of doing it for me. But by my second day at the ranch I come to understand that part of what you get for the $3,600 price (per couple in high season) is the luxury of getting to pretend that you aren’t a luxury guest. Instead you get to settle into an imagined rural idyll, a fantasy of the American West.

It seems as if the other guests—one one-thousandth of the one percent—are drawn in by this sense of purpose, indulging in the idea of genuine connection to the land, even if it is divorced from any sense of personal stakes or necessity. At breakfast in the barn, after selecting from a tasting menu, two couples seated near one another make conversation for a minute. “Do you have activities today?” “We’re doing frontier skills.” (Other activities include “ride along with a rancher” and a weekly rodeo in the summer for guests, among them Hollywood stars, Saudis who come for guided fishing, and the royal family of Qatar.) Or one can traipse around Philipsburg, a well-preserved 19th-century mining and ranching town, which now looks like a charming simulacrum of the “Old West,” even though it caters largely to visitors or new owners and renters from out of town. “Ranching is more about lifestyle than making money or working the land,” the owner of SAJ, a floral boutique in town, tells me. A local high schooler sells “Go home, California!” T-shirts. Rumor has it that last year a developer from California bought almost all the remaining land around town.

In 2022 owning land in the west is the pinnacle of acquisition. “Look at it this way,” says Jim Manley, the owner of the Ranch at Rock Creek. “You’re a billionaire and you’ve already got everything. You’ve got a jet, you’ve got a house in the Hamptons—but you don’t have a ranch. And all of a sudden you see Kevin Costner shooting the bad guys in Yellowstone [Taylor Sheridan’s smash hit neo-western] and the gorgeous Montana scenery. And you say, ‘Hey, that’s cool. I got the money. I could do that.’ ” So they did, sparking a Manifest Destiny–style land-buying frenzy. “The match was lit, and Montana’s on fire now.”