The Coming Crisis Along the Colorado River 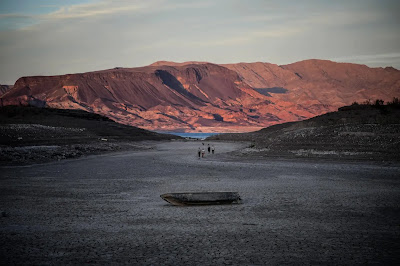 It’s past time to get real about the Southwest’s hardest-working river.
About 40 million people rely on the Colorado River as it flows from Colorado to Mexico. But overuse and climate change have contributed to its reservoirs drying up at such a rapid rate that the probability of disastrous disruptions to the deliveries of water and hydroelectric power across the Southwest have become increasingly likely. Now the seven states that depend on the river must negotiate major cuts in water use by mid-August or have them imposed by the federal government.
Those cuts are merely the beginning as the region struggles to adapt to an increasingly arid West. The rules for operating the river’s shrinking reservoirs expire in 2026, and those seven states must forge a new agreement on water use for farmers, businesses and cities.
What’s worse, all of this is happening in a region that is one of the fastest growing in the United States, even as the signs of an impending crisis become more pronounced. Outside of Las Vegas, Lake Mead, the nation’s largest reservoir by volume, fed by the Colorado and three smaller tributaries, is nearly three-quarters empty and at its lowest level since April 1937, when it was first being filled. The 22-year downward trend is “a stark illustration of climate change and a long-term drought that may be the worst in the U.S. West in 12 centuries,” according to NASA’s Earth Observatory program.
A century of agreements, contracts and contingencies known as the Law of the River are meant to settle who gets water in times of scarcity. But this framework overestimates the availability of water; the legal rights to water held by the river’s users exceed the amount that typically flows into it. The law is also untested in key areas — for instance, the exact terms by which states along the upper reaches of the river must send water downriver for the states there to get their full allocation. All of this has created a great deal of uncertainty, and it’s hard to say how the federal government will go about reducing water allotments, if it comes to that.
As a result, the Colorado River is hurtling toward a social, political and environmental crisis at a pace that surpasses the Law of the River’s ability to prevent it. In a world of less water, everyone who uses the river must adjust...MORE
Posted by Frank DuBois at 12:28 PM