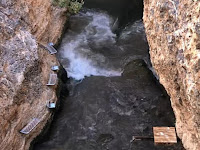 A magnitude 7.6 earthquake rattled Mexico's Pacific coast on Monday and left at least two people dead in its wake. Repercussions of the tremor extended as far as 1,500 miles north, where four-foot-tall waves began churning inside a Death Valley cave called Devils Hole, in what the National Park Service called a "surprising quirk of geology."

Video footage of the phenomenon — which is technically known as a seiche, when sudden changes are observed in a lake or partially enclosed body of water — shows a birds-eye view of the cave as its initially still water erupts into a series of waves that roil and crash intermittently over the course of several minutes...MORE

Our Endangered Species Act enforcers used the Devils Hold Pup Fish to put at least one good ranch out of business. Why didn't they use the ESA to keep the waves from traumatizing the little fish. At least they had an ESA camera at the location so it will be more difficult for the agencies to blame livestock for causing the disturbance and death of the little fish.