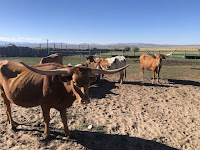 This time last year, North Park rancher Don Gittleson's gut instinct told him, for the first time in his decades of ranching in Colorado, wolf trouble was brewing.

He and other area ranchers had sporadically seen lone wolves over the previous two years. But in September 2021, he started seeing six wolf pups tag along with their parents, who naturally migrated into the state and produced the first wolf pups born in Colorado in 80 years.

Chris Chirichetti II, a traveling nurse living in Greeley, confirmed the pups with a video of the wolfpack running through sagebrush flats northeast of Walden on Sept. 19 while archery hunting.

Gittleson knew then it was game on.

...Then, over the winter months, Gittleson had four cows and a calf killed by wolves, Colorado Parks and Wildlife confirmed. The first kills occurred in December, when Gittleson lost two cows and a neighbor lost two working cattle dogs. But there hasn't been a confirmed wolf kill of livestock since late May.

...Gittleson has collared cows with bells, brought in burros, strung miles of fladry, erected strobe lights and incorporated night riders, all in an effort to deter wolves from killing more of his cattle.

Gittleson said he started researching other ways to keep wolves at bay and read longhorn cattle have been used to steer predators away from cattle, including accounts of longhorn steers with their massive horns charging wolves, coyotes and even bears.

Email ThisBlogThis!Share to TwitterShare to FacebookShare to Pinterest
Labels: wolves