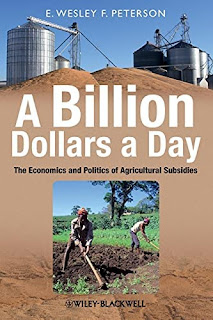 Turkey prices are soaring this Thanksgiving, and that's just the tip of the iceberg. With food prices helping to drive inflation to a 40-year high, Americans are feeling the heat at grocery stores and during family dinners. It's in this context that Congress is about to consider yet another farm bill, a massive piece of legislation that allegedly is key to ending hunger in America with farm subsidies and food stamps. Good luck with that. Subsidies and government handouts aren't the way to increase food abundance. This happy outcome instead requires innovation and entrepreneurial creativity.

There's something maddening ab out the belief that food production would be more abundant and efficient—and the results healthier and less expensive—with even more subsidies for relatively well-off farmers and agribusinesses. Indeed, there is lots of evidence that farm subsidies stifle innovation, make producers less competitive, reduce incentives to boost efficiency and consume less water and fewer pesticides, and shift the focus from farming crops to chasing subsidies. As a result, many farmers end up doing less with more, and people end up paying more for less.

...Never mind those distortions, though, because the farm bill's biggest spending is on food stamps. You don't have to be a genius to figure out that these taxpayer dollars would go a lot further toward putting food on poor families' tables if farm subsidies hadn't raised the price of that food in the first place. After years of food subsidies and changes in food stamp eligibility, around 40 million Americans will receive the benefit for a budget of $140 billion this fiscal year...more