He was accused of stealing huge amounts of water over 23 years. Here’s why no one noticed 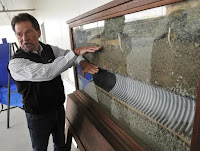 California’s water police struggle to track where water is flowing and whether someone is taking more than they’re supposed to.

A criminal case unfolding in the San Joaquin Valley underscores how the federal government seems to have similar problems.

Prosecutors say they uncovered a massive water theft that went on for 23 years without anyone noticing.

...According to prosecutors, Falaschi engineered a brazen scheme to steal $25 million worth of water from the U.S. Bureau of Reclamation, operator of the Central Valley Project. More specifically, Falaschi stands accused of having his underlings siphon water from the Delta-Mendota Canal, the main conduit for delivering federal water to farms along the west side of the San Joaquin Valley and part of Silicon Valley.

He then billed Panoche customers for this stolen water and used the proceeds to pay “himself and other co-conspirators exorbitant salaries, fringe benefits and personal expense reimbursements,” the indictment says...MORE