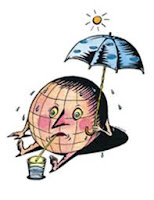 A draft agreement for the international COP27 climate summit includes funds for “loss and damages,” a long-sought provision paying reparations to countries on the front lines of environmental disaster.

The draft, released Monday, must be agreed to by the nearly 200 nations attending the conference and will likely undergo major amendments if it survives that process at all.

Under the draft text, participating countries would begin a two-year implementation process and be ready to put a funding mechanism into action no later than COP29 in 2024...MORE