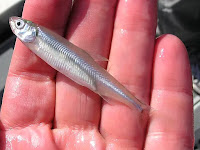 Environmental rules designed to protect imperiled fish in the Sacramento-San Joaquin River Delta have ignited anger among a group of bipartisan lawmakers, who say too much of California's stormwater is being washed out to sea instead of being pumped to reservoirs and aqueducts.

In a series of strongly worded letters, nearly a dozen legislators — many from drought-starved agriculture regions of the Central Valley —have implored state and federal officials to relax environmental pumping restrictions that are limiting the amount of water captured from the delta.

...While the delta provides drinking water for about 27 million Californians and supports the state's massive agricultural industry, it is also a delicate ecosystem that is home to threatened and endangered species — many of which have been suffering amid warming waters, increasing salinity, dangerously low flows and other ecological stressors. The tiny delta smelt are dangerously close to extinction.

State and federal water managers said they have been complying with environmental regulations designed to protect those species, including a so-called "first flush" protocol that mandates two weeks of reduced pumping at the onset of the first big winter storms.

From Jan. 3-16, pumping rates in the delta were reduced to nearly half of their capacity in accordance with the protocol, resulting in a loss of about 84,000 acre-feet of exports from the area, according to estimates from the Public Policy Institute. That's enough water to irrigate 25,000 acres of farmland for a year or supply 150,000 homes...more