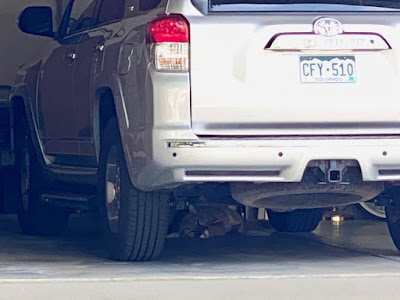 Wildlife officers have relocated a young male mountain lion that was found taking a nap underneath an SUV inside of an open garage in Longmont Monday afternoon. The animal was spotted just before 5 p.m. on Steele Street, which is near Highway 66 and Hoover Street in north Longmont, according to Colorado Parks and Wildlife (CPW) spokesperson Jason Clay. “This was the first report of a mountain lion in Longmont since May 2019,” Clay said. “It doesn’t mean there haven’t been mountain lions there before, it just means it hasn’t been reported to us.” LINK
Posted by Frank DuBois at 8:50 AM