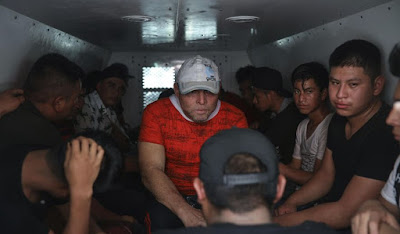 This is the first in a three-part series.

Victoria Perez spent 10 months as a migrant smuggler. When agents finally caught up with her, she told them she had made $200,000 over that time, working two days a week, driving migrants through a Border Patrol highway checkpoint near El Paso, Texas. She charged $1,500 per person when the checkpoint was operating but only $600 when the checkpoint was closed because the risk was low and the roads were wide open, she told agents. The $200,000 she earned for what was essentially part-time work exceeds the annual salary of a member of Congress. It works out to three times the starting pay for a Border Patrol agent. Perez was, in essence, a gig worker, contracting herself as a driver for a much larger organization.It has become an accepted part of border wisdom that the surge of illegal immigrants is enriching the cartels. That’s true to some extent, but most of the money ends up not in the hands of the Gulf Cartel or Zetas, but in the pockets of people like Perez. And 2021 is turning into a boom year. Based on the number of migrants and the prices they are paying, smugglers are easily on track for their biggest profits in history. “Demand is so strong that the prices are going up,” said Todd Bensman, a fellow at the Center for Immigration Studies who tracks smuggling tactics. “There’s huge, huge money being made right now.” Talk to anyone familiar with the cartels, and they will inevitably start speaking in business terms. People are the product, and their families are the customers paying to smuggle them into the U.S. The cartels franchise the operations to coordinators and independent operators such as Perez. What the cartels are selling is a vision: the American dream. People who have the cash or, more often, are willing to go into debt pay big money to chase that dream. What the organizations bring to the table is logistics. The coordinators arrange housing, meals and transportation for tens of thousands of people each month who make the trip, and the cartels take a cut of the profit. The Washington Times has tracked smuggling cases along the southwestern border for several years and maintains a database based on affidavits from Border Patrol agents, Immigration and Customs Enforcement agents, and Customs and Border Protection officers. The accounts in this article are chiefly based on those interviews. According to The Times’ data, Mexicans paid an average of about $7,900 in February 2020, before the COVID-19 pandemic upended cross-border traffic. The average payment this February rose to about $8,900. Central Americans’ average payment increased from about $9,400 last year to $11,000. Rates have held fairly steady in the months since

Who’s getting paid? For some migrants, the first contact with a smuggling organization begins in South America or even farther afield. Federal authorities in recent years have broken up several smuggling operations that they said specialized in guiding migrants from terrorism-tinged parts of the world such as Pakistan and Afghanistan. They travel through Brazil and then up the spine of the Western Hemisphere to reach the U.S. border...MORE