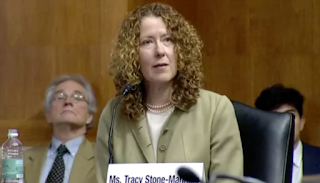 Republicans on the Senate Energy Committee on Tuesday grilled Tracy Stone-Manning, President Biden's pick to lead the Bureau of Land Management, questioning her on partisanship and her personal finances.

While Democrats praised Stone-Manning for her record on issues of importance to the western U.S., ranking member John Barrasso (R-Wyo.) expressed concerns that she “does not fit the bill” to direct the bureau.

“Her career has been defined by her support for policies that restrict multiple-use activities on public lands,” Barrasso said in his opening statement, also citing her opposition to moving Bureau of Land Management headquarters to Colorado.

The GOP senator pressed Stone-Manning about political ads run by the group Montana Conservation Voters last year targeting Sen. Steve Daines's (R-Mont.) conservation record. Stone-Manning served as treasurer and was on the group’s board of directors at the time.

Sen. Jon Tester (D-Mont.) introduced Stone-Manning, who served as his regional state director from 2007 to 2012, and defended her from Barrasso’s allegations.