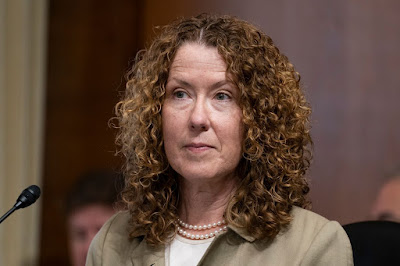 ...Ms. Stone-Manning doesn’t deny belonging to Earth First!, but over the years she has crafted a convenient version of her role. She claims a “disturbed person” from Earth First! approached her in 1989 about delivering a letter to the U.S. Forest Service warning that Idaho trees had been spiked. She says she agreed because she didn’t want anyone to “get hurt,” and retyped the letter on a rented typewriter and sent it. In 1993 she testified against the spikers; two went to jail.

In responses to the Senate Energy and Natural Resources Committee, Ms. Stone-Manning attested she was never “a target” of the investigation. She says she knew nothing of the plot and does not recall “ever discussing tree spiking” with the perpetrators. Her excuse for not immediately turning them in to authorities was that she “did not actually know if they had done what the letter described.”

Public documents have cast suspicion on this version of events, but now the former lead investigator of the 1989 crime has come forward with evidence suggesting Ms. Stone-Manning’s testimony is false. Michael Merkley, a retired special agent for the Forest Service, in a four-page letter to the committee says Ms. Stone-Manning was “not an innocent bystander.” After an investigation led his team to search the Missoula residence where Ms. Stone-Manning and other Earth First! members had lived, he says, a grand jury served subpoenas “on persons suspected of having knowledge of the incident, including Ms. Tracy Stone-Manning.”

Mr. Merkley reports that Ms. Stone-Manning through his investigation was “vulgar, antagonistic, and extremely anti-government” and refused to provide the hair, handwriting and fingerprint samples ordered by the grand jury until threatened with arrest. She refused to answer questions, leaving investigators in the dark for years about the suspects.

Mr. Merkley says that in 1992 he made contact with another woman in the group, who exposed the spikers and Ms. Stone-Manning’s involvement. But this woman also “recounted a conversation she had overheard wherein Ms. Stone-Manning along with other co-conspirators planned the tree spiking and discussed whether to use metal or ceramic spikes in the trees.” This testimony, he says, inspired the grand jury to send Ms. Stone-Manning “a ‘target letter’ which meant she was going to be indicted on criminal charges.” She negotiated a deal “to gain immunity in exchange for her testimony.”

Meanwhile, backing up Mr. Merkley is a new interview in E&E news with John Blount, a ringleader of the operation, who went to jail for 17 months. While Ms. Stone-Manning was not “heavily involved in the planning,” he says she “knew about it far in advance, a couple of months before we headed out.” He provided details of the plan, saying Ms. Stone-Manning was supposed to mail the letter from Billings, in order to throw off investigators.