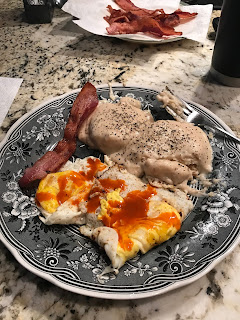 The feel of this morning bodes welcome changes.

It adds to the relief and conclusion of another nearly drought-stricken summer much akin to slogging a path through some disease infested swamp to finally emerge on a solid shoreline. Whew!

These summers, especially June, have become marathons of endurance. The magnitude of the experience was much like Dudley’s recent comment over a shot of cowboy fruit tonic.

I have just forgotten how to have fun.

The acceleration of allowing subscriptions to local progressive print news to expire has ushered in a constant new set of internet banners. Everything seems to be BREAKING. This is BREAKING and that is BREAKING to the point nothing is really new because somebody on Facebook has already posted the story before the mostly biased institutional news have to follow suit.

The topic quickly spreads to most everybody including us NeverFacebookers.

With that in mind, how many out there in Lalaland have noticed the export trends in beef? It seems that the COVID debacle isn’t impacting the loading of beef negatively. August proved to be a record month for the sale of American beef to China as sales topped $1billion for the first time. Heavy hauling continued to Japan where the largest exports of the year were recorded. Combined, exports were up 21% for the month and 18% for the year.

Pork, too, posted another strong month and ahead of the record pace of last year.

That Hollywood oracle of conservatism, James Wood, led the greater national discussion of the iconic American red protein trend with the only real hint of the growing effect of prices to the American consumer. His post was a picture of a ribeye with the most current, exorbitant LA price tag along with the growing bleacher seats chant.

Talking hockie of LGB, the role of intrusive government inflight refueling of inflation is going to drive those sizzling steaks even higher. August personal consumption rose $130.5B which is going to further fuel the highest inflation rate since 1991, 4.3%, when George H. W. was in office and LGB was nominally coherent and capable of reading plagiarized script as if it was his own.

The news only gets worse.

Many things are in play, but the bottom line is food is going to become more and more expensive. Fertilizer, the golden commodity that has kept the real destruction of rain forests at bay, is increasing by the day. Urea and phosphate inventories are particularly tight and becoming more so. Two indicators show the price ratio between new crop corn and potash and new crop corn to NOLA Urea at all-time highs.

Collectively, these trends are suggesting new crop fertilizers will up at least 15-20%.

There is also the continuing beef story. USDA reports front loading of cattle on feed, but the real story is the calf inventory at home, on the range, in the drought plagued West. China is watching those calves as much as any talking head in America. Couple that with there inability to satisfy their protein demands and their COVID defying container rates, the market is poised to whistle some song.

And, speaking of whistling, whoever that was that sold that Iowa farmland for $26 grand per acre has got to be happy. Somebody needs to be happy because that should give the greater world chills. Implicit in that is the ever-growing inability of young farmers to enter the capital-intensive world of agriculture. It is also an indicator of relative advantages over farmland elsewhere.

Of course, real and political water is in play.

A most pertinent example of what is happening in the West can be found in the opening Supreme Court salvos of the continuing water war between the states of New Mexico and Texas. What could have been solved by allowing local leadership work out the differences in the interstate debate (as they have done repeatedly in the past), the state of New Mexico may well get taken to the cleaners over running the matter back up the Rio Grande to the greenhands of Santa Fe.

The real matter isn’t the criminalization of the farming community over their historical use of water. The elephant in too many rooms is the ever-expanding urban world and the total absence of new water sources, distribution, and storage concepts and needed infrastructure. In the latter case, Las Cruces is the implicated consumer.

In the greater West, every major urban area is a counterpoint. In California, 22.4 million residents have joined the throng of users since any basic sources of water have been conceptualized much less capitalized. Food production adequacy simply can’t be maintained over time with that kind of metric, but the real bombshell has been revealed.

Only the brilliance of American agriculture has saved this epoch.

The consideration hit me when the discussion touched on the fact that it had been too long since venison gravy graced our morning table. What venison has to do with American beef can be left to the judgment of cattle producers, but most of them will know that answer in a heartbeat. It’s suffice to say that American kitchen tables could use a dose of family breakfasts over venison gravy, generational recipes for hot biscuits (filled with hand churned butter), fried eggs gathered from under laying hens yesterday, homemade pear preserves, and chile rellenos deep fried that very morning in lard.

Our land would be a better place. Our continuing heritage would get a boost, too. Children would be expected to carry on real conversations with historical bridge keepers and lessons and memories could be shared and retold.

Most importantly, our past would not be defined as concluded, but, rather, … as a chapter in a wonderful, continuing story.

Stephen L. Wilmeth is a rancher from southern New Mexico. “Kids that learn to cluck to hens gathering eggs are too few.”