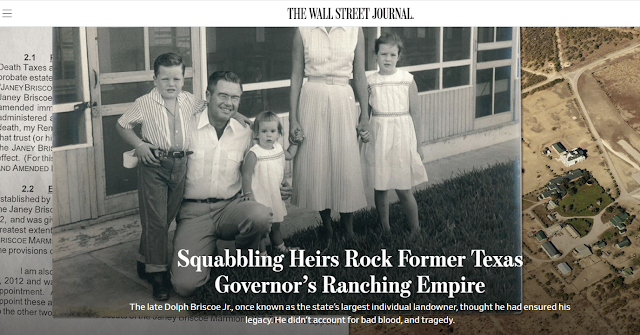 UVALDE, Texas—In a family photograph taken in 1958, future Texas Gov. Dolph Briscoe Jr., wearing a starched white cowboy shirt, is pictured with his wife and three young children in front of their wooden ranch house, surrounded by Briscoe land as far as the eye can see.

The governor, known to some close relatives as “Big Daddy” and to the rest of the world as the largest individual landowner in Texas, was determined to keep his roughly 600,000 acres in the family long after his death.

In estate documents he signed a few years before he died in 2010, Mr. Briscoe expressed his wishes for his three children to share equally in the land, and to use it primarily for ranching.

His plan succeeded—but only for a time. Now, in ways even Big Daddy wasn’t able to control, the ranching business at the heart of the Briscoes’ fortune for nearly a century is tearing the family apart.

Mr. Briscoe’s oldest daughter, Janey Briscoe Marmion, died of cancer in 2018 at the age of 68, leaving no heirs after her only child, Kate, died by gunshot a decade earlier. The families of the surviving siblings, Cele Briscoe Carpenter and Dolph Briscoe III, known as Chip, are fighting in court over how to divide up Janey’s portion of the Briscoe fortune. The outcome will determine who gets control over an estimated $1 billion of assets and will shape the ranching and philanthropic legacy of one of Texas’ most prominent families.

Cele and her three grown children, in lawsuits filed in Uvalde County court, are accusing Chip of manipulating his frail older sister into signing documents that disinherited them from her estate, tilting control of the Briscoe ranching fortune to him and his two sons in contravention of their grandfather’s wishes.

The dispute is about “an older brother’s systematic domination and improper exercise of influence—both directly and indirectly—to secure a disproportionate share of the family’s inheritance for himself and his descendants,” Cele’s children allege.

In court documents and interviews, Chip, now 68, and his sons in turn have portrayed 65-year-old Cele as an extremely wealthy woman who drifted away from the family business after moving to Dallas and marrying into a dynasty with a fortune of its own. Chip’s side says Cele’s family is using the litigation to try to force a breakup of the family holdings, and accuses them in a court document of “breathtaking audacity” in seeking to overturn Janey’s will and jeopardizing her plan to leave a substantial share of her fortune to charity....

For others, a pdf version is here